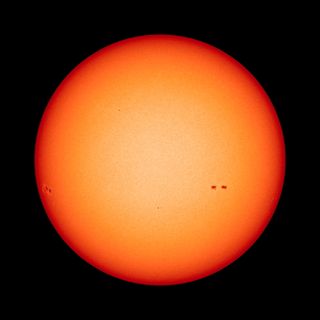 This image shows the Earth-facing surface of the Sun on February 28, 2013, as observed by the Helioseismic and Magnetic Imager (HMI) on NASA’s Solar Dynamics Observatory. HMI observed just a few small sunspots on an otherwise clean face, which is usually riddled with many spots during peak solar activity.
(Image: © NASA/SDO)

The sun should roar back to life sometime in 2013, producing its second activity peak in the last two years, scientists say.

Our star has been surprisingly quiet since unleashing a flurry of flares and other eruptions toward the end of 2011. But this lull is likely the trough between two peaks that together constitute "solar maximum" for the sun's current 11-year activity cycle, researchers say.

"If you look back in history, many of the previous solar cycles don't have one hump, one maximum, but in fact have two," solar physicist C. Alex Young, of NASA's Goddard Space Flight Center in Greenbelt, Md., said today (March 22) during a NASA webcast called "Solar MAX Storm Warning: Effects on the Solar System."

"That's what we think is going to happen," Young added. "So we've reached one of those humps, and we think that eventually activity will pick back up and we'll see another hump — a double-humped solar maximum."

Before the twin peaks scenario began to gain adherents, many researchers had predicted that solar maximum for the current cycle, known as Solar Cycle 24, would come this May. But given how quiet the sun is at the moment, the second hump will likely occur later than that, and it could last into 2014, scientists have said.

Saying the sun is quiet right now, however, does not mean that it's lifeless. Indeed, our star blasted out a huge cloud of superheated plasma known as a coronal mass ejection (CME) on March 15.

But CME effects aren't all negative. They can also supercharge Earth's auroras, also known as the northern and southern lights, giving skywatchers around the world a treat.