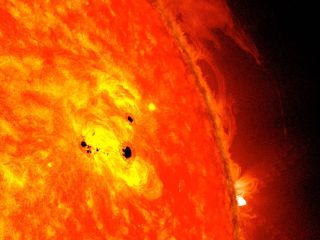 The bottom two black spots on the sun, known as sunspots, appeared quickly over the course of Feb. 19-20, 2013. These two sunspots are part of the same system and are over six Earths across.
(Image: © NASA/SDO/AIA/HMI/Goddard Space Flight Center )

The sun is surprisingly quiet at the moment, but that may be because our star is gearing up for the second phase of a one-two wallop in its 11-year activity cycle, some scientists say.

The sun has slumped to its present lull from a very fiery 2011, seeming to contradict a widely predicted 2013 peak in solar flares, sunspots and other activity for the current Solar Cycle 24. But the forecasts may be right after all, said solar physicist Dean Pesnell, of NASA's Goddard Space Flight Center in Greenbelt, Md.

"This is solar maximum," Pesnell, project scientist for NASA's Solar Dynamics Observatory spacecraft, said in a statement. "But it looks different from what we expected because it is double-peaked."

Though the sun's activity cycle is often regarded as a smooth bell curve, proceeding from low to high and then back down to low again, twin peaks are apparently not too uncommon. The last two solar maxima — which occurred in 1989 and 2001 — were doubled-peaked, exhibiting mini-cycles that lasted about two years, Pesnell added.

So the 2011 surge may just have been part one of Solar Cycle 24's fireworks display.

"I am comfortable in saying that another peak will happen in 2013 and possibly last into 2014," Pesnell said.

If a second peak does occur in 2013, activity in the sun's southern half might be the main driver. Our star's northern and southern hemispheres sometimes peak at different times, researchers said, and the south has been significantly quieter than the north thus far in Solar Cycle 24.

Pesnell is a member of the Solar Cycle Prediction Panel, a group of solar physicists who gathered in 2006 and 2008 to forecast the next solar maximum. Weaving together a number of lines of evidence, including Solar Cycle 24's very deep minimum five or so years ago, the group made the following prediction:

"The panel has decided that the next solar cycle (Cycle 24) will be below average in intensity, with a maximum sunspot number of 90. Given the date of solar minimum and the predicted maximum intensity, solar maximum is now expected to occur in May 2013."

A peak in just two months doesn't seem likely now, given how quiet the sun has been recently, researchers said.

"We may be seeing what happens when you predict a single amplitude and the sun responds with a double peak," Pesnell said.