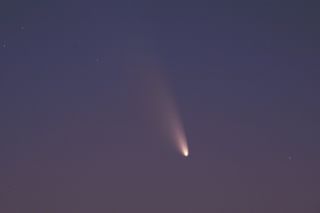 A comet that just made its way into the Northern Hemisphere evening sky should be at its brightest this weekend, but it may be tricky for stargazers to see.

On Sunday (March 10), the Comet Pan-STARRS is expected to make its closest approach to the sun, potentially making the comet shine even more brilliantly when it appears at twilight low in the western sky, weather permitting. But stargazers will need a bit of preparation (not to mention a clear sky) to see the comet.

"There is a catch to viewing Comet Pan-STARRS," Amy Mainzer, the principal investigator of NASA's near-Earth object hunting NEOWISE mission at the Jet Propulsion Laboratory in Pasadena, Calif., said in a statement Thursday (March 7). "This one is not that bright and is going to be low on the western horizon, so you'll need a relatively unobstructed view to the southwest at twilight and, of course, some good comet-watching weather."

"It will appear in the west at sunset, from around the 8th to the 13th of March 2013, and will be visible to the naked eye up to the end of the month: Comet Pan-STARRS C/2011 L4 will traverse Cetus, Pisces, Pegasus and Andromeda," Paris Observatory officials wrote in a statement Thursday, as the comet entered the Northern Hemisphere's evening sky after months of being visible from the Southern Hemisphere.

Comet Pan-STARRS, which has the official designation C/2011 L4 (PANSTARRS), was discovered in June 2011 by astronomers using the Panoramic Survey Telescope and Rapid Response System (or PANSTARRS) telescope in Hawaii. The comet made its way into the inner solar system from the Oort cloud — a group of icy bodies orbiting the sun in a region that extends from just beyond the orbit of Neptune out to a distance of 93 trillion miles (150 trillion kilometers).

While Pan-STARRS may start dimming after Sunday, that doesn't mean that comet observers should put away their binoculars yet. On March 12 and 13, the comet will appear close to the moon, possibly even silhouetting it according to SPACE.com stargazing columnist Geoff Gaherty, an astronomer with the Starry Night Education night sky software company.

There are even comet sighting opportunities in April.

On April 3, the comet should be in the same part of the sky as the Andromeda Galaxy. Although the comet won't still be visible with the naked eye, stargazers with telescopes could still get a nice view of the comet and galaxy, Gaherty explained.

Pan-STARRS has already put on a show for stargazers in the Southern Hemisphere. It is one of several comets in the night sky expected to dazzle observers this year. Last month, amateur astronomers managed to photograph Pan-STARRS and another celestial wanderer — Comet Lemmon — at the same time to document rare photos of two comets together in the night sky.

Later this year, another comet from the Oort Cloud could be the brightest comet to pass by the Earth in a generation. Comet ISON is expected to outshine every comet in recent memory when it makes its closest swing by the sun late November.