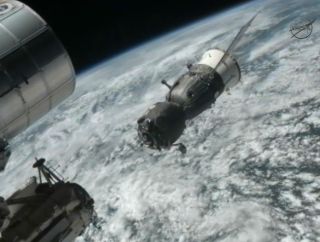 The Russian Soyuz TMA-03M backs away from the International Space Station after undocking to return three members of the Expedition 31 crew to Earth on July 1, 2012, in this still from a NASA broadcast.
(Image: © NASA TV)

Next stop: Earth. Three astronauts cast off from the International Space Station early Sunday (July 1) to begin the journey home aboard a Soyuz space capsule as they wrap up a months-long stay at the orbiting outpost.

The Soyuz is expected to land at 4:14 a.m. EDT (0814 GMT) on the Central Asian steppes of Kazakhstan. As it backed away from the space station, Kononenko tested a new digital autopilot system for the Soyuz, NASA officials said. Cameras on the space station beamed back spectacular video of the Soyuz's undocking and departure.

"When a frontier feels like home, it is no longer a frontier; it has become 'civilization.' Those determined to wander must now pack their bags and move further into the cosmos," Pettit wrote in a blog post about his upcoming journey home. "Space station is very much on the frontier. It is only my temporary home, and now it is time for me to venture back to my real home." [Photos: Space Station's Expedition 31 Mission]

Throughout their mission, Pettit and Kuipers actively shared their space experiences with the public through Twitter, photos and blog posts. Pettit even penned a special poem, called "Last Day in Space," to commemorate his imminent return.

During their stint at the space station, Pettit, Kononenko and Kuipers also played host to the first ever visiting commercial spacecraft in May —SpaceX's Dragon capsule. The unmanned Dragon spacecraft was launched to the orbiting outpost as part of a crucial test flight to demonstrate its ability to haul cargo to and from the station.

As the robotic spacecraft approached the orbiting complex, Pettit and Kuipers used the space station's robotic arm to manually attach it to the outpost.

Pettit, Kononenko and Kuipers launched into space on Dec. 21, 2011, and arrived at the orbiting laboratory two days later. The spaceflyers began their stay as members of the station's Expedition 30 crew, but kicked off Expedition 31 with the departure of three previous station residents in April.

Kononenko served as commander of Expedition 31, but will pass the post on to fellow Russian cosmonaut Gennady Padalka in an official change-of-command ceremony Saturday (June 30), prior to his departure.

Padalka arrived at the space station in mid-May with NASA astronaut Joe Acaba and Russian cosmonaut Sergei Revin. The three will remain aboard the orbiting outpost until September.

Later this month, on July 14, another Soyuz spacecraft is scheduled to launch three more crewmembers to the space station to replace the returning astronauts.