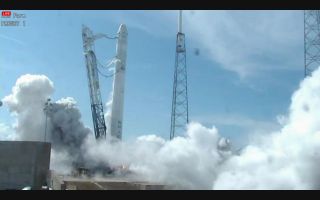 SpaceX conducted a static fire of its Falcon 9 rocket on April 30, 2012. During the test, the nine Merlin engines that power the rocket's first stage were ignited for two seconds.
(Image: © SpaceX)

The private spaceflight company SpaceX successfully test fired the rocket that will launch the first-ever commercial space capsule to the International Space Station today (April 30), after a slight delay that was caused by an apparent computer glitch.

SpaceX officials conducted the so-called "static fire test" of the firm's Falcon 9 rocket today on a second try at 4:15 p.m. EDT (2015 GMT) at Space Launch Complex 40 at the Cape Canaveral Air Force Station in Florida. The Falcon 9 rocket is poised on the launch pad, ready to blast off toward the space station on May 7. SpaceX aired the engine test live via the company's website.

A first attempt, which aimed to fire the rocket's engines at around 3 p.m. EDT (1900 GMT), hit a snag with 47 second remaining in the mock countdown. SpaceX officials traced the problem to a flight computer, but the issue was resolved after a brief delay.

During today's static fire test, the nine Merlin engines that power the Falcon 9 rocket's first stage were ignited for about two seconds, as the booster remained attached to the launch pad.

"So far things look good," SpaceX spokesperson Kirstin Grantham said in a statement. "Engines fired for 2 seconds, as scheduled. Engineers will now review data as we continue preparations for the upcoming launch."

SpaceX is expected to conduct a thorough review of all the data as engineers make final preparations for the upcoming launch, which is currently targeted for May 7.

SpaceX's Falcon 9 rocket is a two-stage booster that stands about 180 feet tall (55 meters) and is topped with the company's unmanned Dragon space capsule. It is the capsule that will be making the trip to the International Space Station, where a crew of astronauts is waiting to pluck the gumdrop-shaped capsule from space using a robotic arm. The Dragon vehicle will be attached to the orbiting complex with the robotic arm.

The Hawthorne, Calif.-based SpaceX (short for Space Exploration Technologies, Corp.) has a $1.6 billion contract with NASA to conduct 12 cargo missions to the space station with its Dragon spacecraft.

"This will be the first attempt by a commercial company to send a spacecraft to the International Space Station, a feat previously performed by only a few governments. Success is not guaranteed," SpaceX officials said. "If any aspect of the mission is not successful, SpaceX will learn from the experience and try again."

SpaceX is one of two private companies with contracts to provide unmanned space cargo flights to the space station for NASA. The Virginia-based company Orbital Technologies, Corp., has a $1.9 billion contract to provide eight cargo delivery missions using its own Cygnus spacecraft and Antares rocket. The first test of that spacecraft and rocket is expected to occur later this year.

SpaceX officials said the May 7 launch of Dragon toward the space station will also be webcast live via the company's website.