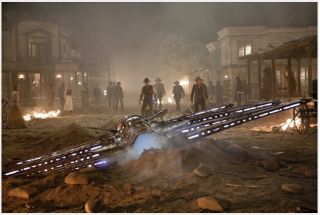 The new film "Cowboys and Aliens," starring Harrison "Indiana Jones" Ford and Daniel "James Bond" Craig, opens today and is likely to snatch the top spot at the box office this weekend. The anachronistic sci-fi thriller tells the story of extraterrestrials who attack a small New Mexico town in search of — well, I won't give away any spoilers.

Cowboys and aliens? Why not? Many people believe that alien contact is nothing new, and that Earth has been visited for millennia. Some, such as best-selling Swiss author Erich von Däniken, have suggested (based on flawed evidence and logic) that aliens built the pyramids in Egypt. Others believe that the giant drawings in the Nazca desert of Peru, in South America, were created by (or for) extraterrestrials in space ships. In fact, there's good evidence that the Nazca Lines were created by the Nazca Indians, probably as part of ceremonial rituals.

But what about sightings and reports of aliens in the Old West? Surprisingly, there actually are a few reports of extraterrestrial encounters in the 1800s. In those days folks didn't use terms like "UFO" or "flying saucer" (that phrase didn't appear until 1947), but instead referred to spacecraft as "airships." [10 Alien Encounters Debunked]

By far the most detailed (and most dramatic) encounter between cowboys and aliens occurred in 1897 Texas. This account ran in the April 19 Dallas Morning News: "About 6 o'clock this morning the early risers of Aurora [Texas] were astonished at the sudden appearance of the airship which has been sailing throughout the country. It was traveling due north and sailed over the public square and when it reached the northern part of town it collided with the tower of Judge Proctor's windmill and went to pieces with a terrific explosion, scattering debris over several acres of ground." [UFO Found on the Ocean Floor?]

This is remarkable enough, but the account takes on an even more modern twist: "The pilot of the ship is supposed to have been the only one aboard, and while his remains were disfigured, enough of the original has been picked up to show that he was not an inhabitant of this world. Mr. T.J. Weems [of] the U.S. Army... gives his opinion that the pilot was a native of the planet Mars. Papers found on his person — evidently the records of his travels — are written in some unknown hieroglyphics, and cannot be deciphered... The ship was built of an unknown metal, resembling somewhat a mixture of aluminum and silver, and must have weighed several tons. The town today is full of people who are viewing the wreckage and gathering specimens of strange metal from the debris."

This amazing UFO encounter, complete with a crashed spacecraft, dozens of witnesses, a recovered dead Martian, and metallic wreckage came not from a novelist but instead a credible witness and respected reporter for the newspaper, a Mr. E.E. Haydon. Fifty years later, a nearly identical story would circulate about another, very similar UFO crash in a neighboring state: Roswell, N.M.

The late UFO investigator Phil Klass researched this encounter between cowboys and aliens for his book “UFOs Explained." The accounts by witnesses fell apart under close scrutiny. No follow-up newspaper stories appeared about this amazing incident; no witnesses could be found to support Haydon's story, and nothing of the alien nor his "several tons" of mysterious metallic spacecraft wreckage was ever found. Plus, it was later revealed that Judge Proctor didn't even have a windmill for the alien to crash into! It turned out that Haydon had made the whole thing up as a publicity stunt to get people to come to the dying Texas town. Once a lively and bustling frontier town frequented by prospectors on their way to the Gold Rush, Aurora had fallen on hard times and needed a tourism boost.

It was a cracking good yarn while it lasted. Stories of cowboys and aliens have entertained us for well over a century, though hard evidence of extraterrestrials remains as elusive as ever.

Benjamin Radford is deputy editor of Skeptical Inquirer science magazine and author of Scientific Paranormal Investigation: How to Solve Unexplained Mysteries. His Web site is www.BenjaminRadford.com.