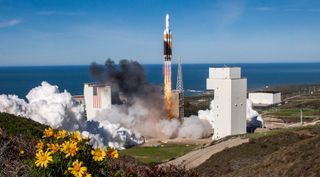 A United Launch Alliance Delta 4 Heavy lifts off Jan. 19 carrying a classified payload. The delay of the launch from late 2018 helped cushion a projected decline in earnings that Lockheed Martin from ULA in 2019.
(Image: © ULA)

The Air Force sole-sourced the LVPS contract to ULA because the Delta IV Heavy launch vehicle is the only rocket that currently meets the mission requirements for NRO assets, including unique handling at the launch site and mission-unique hardware. "The Air Force determined ULA was the only certified launch service provider with the capability to provide launch services for NROL-68, NROL-70, and NROL-91 missions," a spokesman said. A sole source request for proposal was issued to ULA in March 2017 for the three NRO missions.

The Air Force intends to compete future national security space heavy lift launch services when new vehicles enter the market. SpaceX's Falcon Heavy is expected to be certified in the coming months, and competitors Blue Origin and Northrop Grumman are developing new rockets, as is ULA. Although ULA is retiring the Delta 4 Medium this year, the Air Force wants to keep the Heavy in service until the mid-2020s to ensure it has a heavy lift capability until other vehicles are ready.