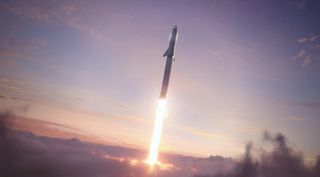 Jonathan Hofeller, SpaceX's vice president of commercial sales, said the company is in talks with prospective customers for the first commercial launch of that system roughly two years from now.

"We are in discussions with three different customers as we speak right now to be that first mission," Hofeller said at the APSAT conference here. "Those are all telecom companies."

SpaceX's Super Heavy booster and Starship upper stage are being designed to launch up to 20 metric tons to geostationary transfer orbit, Hofeller said, or more than 100 metric tons to low Earth orbit. Equipped with a nine-meter payload fairing, the launch system is designed to carry crew and resources to the moon and Mars, but is also SpaceX's next vehicle to send satellites into orbit around the Earth and elsewhere.

SpaceX performed a "hop" with a prototype of Starship in April, propelling the vehicle just centimeters off the ground, Hofeller said. Future tests will reach higher altitudes, he said.

"We have future hops coming up later this year," he said. "The goal is to get orbital as quickly as possible, potentially even this year, with the full stack operational by the end of next year and then customers in early 2021."

SpaceX ultimately intends to supersede its current partly reusable Falcon 9 and Falcon Heavy launchers with the fully reusable Super Heavy booster and Starship upper stage. The company won't rush customers from one generation of vehicles to another, however.

"Falcon 9 and Falcon Heavy are going to be around as long as our customers want them," Hofeller said. "If we make them obsolete by having a better product and a lower price, great."

Hofeller reiterated that prices would keep dropping through the introduction of Super Heavy and Starship. The fully reusable nature of the launch system enables those lower prices, he said.

"You could potentially recapture a satellite and bring it down if you wanted to," Hofeller said. "It's very similar to the [space] shuttle bay in that regard. So we have this tool, and we are challenging the industry: what would you do with it?"

SpaceX explored making the Falcon 9 fully reusable, but struggled with decelerating the upper stage, Hofeller said. Efforts to slow the upper stage would have drained energy otherwise used to carry a payload, he said.

SpaceX has reused a single Falcon 9 first-stage booster up to three times to date. The block 5 version of the rocket, which debuted last year, is designed for up to 10 launches without major refurbishment.

Hofeller said SpaceX plans to reuse a single Falcon 9 booster five times by the end of this year.