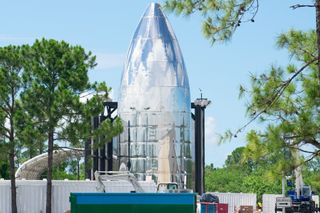 SpaceX's Starship is under construction at a Florida steel site.
(Image: © Amy Thompson/Space.com)

COCOA, Fla. — Deep in the heart of the Florida Space Coast's industrial area, a Mars-colonizing spaceship is being built.

The gleaming new resident is a prototype of SpaceX’s interplanetary craft known as Starship — the 100-passenger vehicle that the company hopes will one day take humans and cargo to the moon, Mars and beyond.

SpaceX, which previously announced it would build prototypes in both Texas and Florida, is leasing the Cocoa facility from Coastal Steel. When finished, the metallic craft will stand 180 feet tall (39.6 meters) by 30 feet (9 m) wide.

Peeking out above the treeline, the Florida Starship is finally starting to take shape, after the recent addition of its nose cone. When SpaceX founder and CEO Elon Musk acknowledged the project last month, the prototype was just a massive, reflective ring of steel; now it’s beginning to look like a bona fide spaceship.

The company has already made significant progress on a similar prototype, dubbed Starhopper, at its South Texas facility. But SpaceX hopes a little friendly intracompany competition will not only improve the design of the craft but also speed up the development process.

"Both sites will make many Starships. This is a competition to see which location is most effective. Answer might be both,"  Musk said via Twitter last month. "Any insights gained by one team must be shared with the other, but other team not required to use them," he added in another tweet.

Back in January, eagle-eyed observers near the company's Texas facility spotted the silver spaceship towering above the flat landscape. (Soon thereafter, Musk confirmed via Twitter that the craft was a prototype, much like the Grasshopper rocket that preceded SpaceX's workhorse Falcon 9.) In stark contrast to the slick black-and-white paint scheme of SpaceX's Falcon series of rockets, both Starship prototypes sport a shiny, stainless-steel skin that exudes vintage sci-fi vibes.

Such short hops will pave the way for operational flight. The final Starship will launch atop a powerful rocket called the Super Heavy; both vehicles will be reusable. The Florida and Texas construction sites will both build final flight-ready versions of Starship and Super Heavy, which together will ultimately stand nearly 400 feet (122 m) high.

SpaceX says it will take 31 Raptor engines to power the Super Heavy rocket, with another seven Raptors on the Starship itself. The engines, which are still in development, are fueled by a combination of liquid methane and liquid oxygen, packing about twice the punch of the Merlin engines currently powering the company's Falcon series of rockets.

To date, Starship and Super Heavy have just one flight on their manifest. Last September, Musk revealed that Japanese billionaire Yusaku Maezawa booked the first trip aboard Starship — a jaunt around the moon scheduled to occur sometime in 2023.

The Starship system is the next installment in SpaceX's procession of increasingly larger rockets. Just over a year ago, the Falcon Heavy debuted, and this past April the rocket carried its first official payload into orbit. The massive rocket, which boasts 5 million pounds of thrust at liftoff, is set to fly again tonight (June 24).

But even the Heavy's 27 engines aren't enough for SpaceX. To achieve his dream of making humanity an interplanetary species, Musk needs the Starship and the Super Heavy.