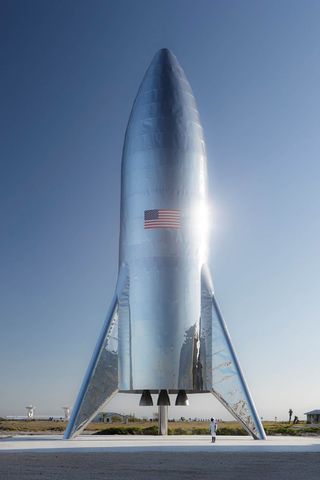 SpaceX has built itself a shiny new rocket.

"Starship test-flight rocket just finished assembly at the @SpaceX Texas launch site. This is an actual picture, not a rendering," Musk said via Twitter. He also posted a photo of the vehicle, which included a spacesuit-clad person for scale. [Images: SpaceX's Giant Spaceship for Mars Colony & Beyond]

The construction milestone seems to keep SpaceX on target to begin short "hopping" flights with the prototype vehicle soon. Musk said earlier this week that SpaceX aims to start such trial runs, which will take place at the Texas site near Brownsville, in the next four to eight weeks.

These flights will be similar to those that SpaceX performed in 2012 and 2013 with its Grasshopper test vehicle, Musk added in another tweet Thursday night. The Grasshopper runs, which helped SpaceX get ready to land and re-fly Falcon 9 rocket first stages, reached a maximum altitude of about 2,500 feet (700 meters).

The bona fide Starship will go very far afield, however. SpaceX envisions Starship — which will launch atop a giant rocket called the Super Heavy — taking 100 passengers at a time to and from the moon and Mars, and perhaps other deep-destinations as well. (These names are a recent development. SpaceX had called the reusable rocket-spaceship duo the BFR, short for "Big Falcon Rocket.")

Starship and the Super Heavy will do a variety of other work as well. SpaceX plans to have the duo take over all of the company's spaceflight duties eventually, from launching satellites to supplying and servicing orbiting space stations to ferrying people on superfast "point to point" trips around the globe. SpaceX has already booked the first passenger for Starship, billionaire Yusaku Maezawa, the founder of Japanese e-commerce giant Zozo, for a trip around the moon some time in the 2020s.

SpaceX's Falcon 9 and Falcon Heavy rockets are white, but Starship and the hopper will remain shiny, unpainted metallic silver, Musk has said. But the latter pair will be far from identical. The operational vehicle will have windows, and seven Raptor engines compared to three for the hopper.

And the two vehicles will be different in other ways as well.

"This is for suborbital VTOL [vertical takeoff and landing] tests. Orbital version is taller, has thicker skins (won’t wrinkle) & a smoothly curving nose section," Musk said in another tweet.

The first orbital Starship prototype should be finished "around June," he added in another tweet.

If the testing and development campaign goes well, Starship and Super Heavy could begin flying Mars missions as early as the mid-2020s, Musk has said.