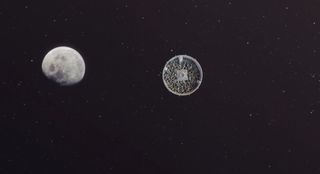 Rocket Lab plans to launch small spacecraft to the moon and beyond using its new Photon satellite platform, Electron rockets and a bulk maneuvering stage. The first Photon vehicle could fly in 2020.
(Image: © Rocket Lab)

WASHINGTON — Rocket Lab is shooting for the moon. Literally.

The small-satellite launch startup announced today (Oct. 21) that its new Photon satellite platform will be able to fly small spacecraft on deep-space missions to the moon and beyond. The plan will combine Rocket Lab's workhorse Electron rocket with Photon, a vehicle designed to provide end-to-end spaceflight services for customer payloads.

The move, Rocket Lab says, will allow the company to go beyond low Earth orbit (LEO) and bring "medium, geostationary, and lunar orbiters within reach for small satellites," according to a statement. To reach the moon, the company will add what it calls a "bulk maneuver stage" to the Electron-Photon combo to allow lunar flyby and moon-orbiting missions.

Video: Watch Rocket Lab Launch Its Highest Flight Ever!
More: Rocket Lab Gearing Up for 1st Launches from US Soil in Early 2020

NASA plans to return astronauts to the moon by 2024, and Rocket Lab sees small satellites playing a major role in that effort.

"Small satellites will play a crucial role in science and exploration, as well as providing communications and navigation infrastructure to support returning humans to the moon," Rocket Lab CEO Peter Beck said in the statement. "In the same way we opened access to LEO for smallsats, Rocket Lab is poised to become the dedicated ride to the Moon and beyond for small satellites."

Rocket Lab unveiled the Photon satellite platform in April at the 35th Space Symposium in Colorado Springs, Colorado. The vehicle is an evolution of the company's "kick stage," a single-engine craft used to deliver payloads into their final circular orbits around Earth, and is expected carry payloads of up to 375 lbs. (170 kilograms) for up to five years, Rocket Lab has said.

The company's 57-foot-tall (17 meters) Electron booster made its launch debut in 2017 and is designed to launch payloads of up to 500 lbs. (227 kg) into low Earth orbit for $5 million per flight. To date, the company has launched nine missions, including its highest mission yet, which lifted off last week.

That mission, called "As The Crow Flies," lifted off from Rocket Lab's Launch Site 1 on New Zealand's Mahia Peninsula on Oct. 17 local time. It delivered a small satellite called Palisade into an orbit 620 miles (1,000 kilometers) above Earth for customer Astro Digital.

Meanwhile, Rocket Lab is busy building its second launchpad, called Launch Site 2, at NASA's Wallops Flight Facility on Wallops Island, Virginia. The company is also aims to eventually reuse the first stage of its Electron boosters. To do that, it is developing a method to have the booster parachute back to Earth and catch it in mid-air with a helicopter.