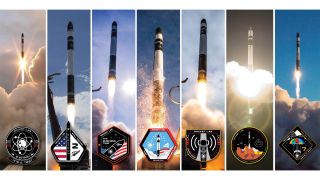 Rocket Lab hopes to broaden its capabilities with a host of new projects and missions. The company is currently working on a reusable rocket system — which will be different from SpaceX's existing system — that will be informed by data from the company's previous flights and its upcoming flight 10. The firm is also building a U.S.-based launch pad in Virginia and developing Photon, a unique, end-to-end satellite service.

Space.com spoke with Rocket Lab CEO Peter Beck, who founded Rocket Lab in 2006, about what the company has been up to and the progress of these ambitious projects.

Space.com: How do you feel about Rocketlab's impressive progress over this past year?

Peter Beck: I'm incredibly proud of the team. We stood out to try and build a rocket, and launch it monthly, and increase the launch cadence through this year, and we've made great progress on that.

At the moment, every 30 days, a new rocket comes up the production line. It's great to see that cadence and deliver the service that the customers really need.

Space.com: Obviously, we're really excited to see the reusable rocket system you're developing. How much progress has been made with that?

Beck: We'd been working on that for, sort of, nine months until we made the announcement. And flight 10, there's quite some significant changes to the launch vehicle for flight ten.

We have new telemetry systems and new bits and pieces on the launch vehicle. The stage 1, you'll see the exterior will look slightly different.

It's an immensely challenging task, but we think we've done enough research to conclude that it's feasible

We've been saying don't expect us to capture it on the first go. It's going to be a number of attempts before we manage to get one through the atmosphere.

Space.com: When do you hope to start staging recoveries?

Beck: We've been gathering data ... we try and do a lot of that in simulation before we actually go and fly. Flight 10 is really important because it gives us the most fidelity of the instrumentation that we've had to date.

It's pretty difficult to put a timeframe on it because we'll fly flight ten and we'll learn a lot and we'll model that ... and we'll make changes and then we'll fly flight 11 and we'll probably do the same again. So, really, it's really hard to predict when were gonna have the first fully fledged recovery attempt.

I would hope next year that we should be successfully recovering.

Now, for a small launch vehicle, that's not enough propellant … so that's not really an option for us.

At the other end of the spectrum is just re-entering completely passively, not dissimilar to a meteorite or a human space capsule. And I think we all have visions of what they look like when they re-enter the Earth's atmosphere: kind of flaming infernos streaking into the Earth's atmosphere. And that's very difficult — to make a rocket stay in one piece to do that.

So we kind of fit in the middle of those two spectrums … so that we're not scorching in at the speed of a reentry capsule.

Space.com: How is the developing, U.S-based launch pad progressing?

Beck: Fantastic is the answer to that. It never ceases to amaze me how quickly that pad is being built.

Later this year that pad will be activated, ready to fly. So, considering we only really started driving piles in january of this year, that's an incredible feat.

Early next year we'll fly out the first mission from that pad. The pad will be fully completed and activated by the end of this year.

Space.com: What still has to be done before the launch pad can be considered complete?

Beck: It's easy to think of just the launch pad, but there's a tremendous number of services and auxiliary buildings and infrastructure that's required.

But we're not just building a pad down at Wallops, we're also building a complete integration facility that can house up to four electrons at once. And that facility also has two clean rooms, aux rooms and maintenance facilities.

So, it's not just a launchpad, there's a whole facility down there as well.

Space.com: How will the launch pad integrate and work together with NASA's Wallops Flight Facility?

Beck: Some infrastructure is shared and some is not. So, it sits right beside Pad 0A, the Antares pad, and shares some of the infrastructure and nitrogen and things like that.

All the liquid oxygen and fueling is independent in that facility. So, there's definitely some shared services but it's still very much a very independent facility and pad.

Space.com: What are you most excited about going forward with all of these projects?

Beck: There's really two things. So, firstly, continuing to ramp up production and getting our customers to exactly where they need to be on their timeframe has proven to be really critical. So that's immensely satisfying, because that's what we set out to do.

If you decided tomorrow you wanted to go out and start a company and put a satellite on orbit, what are the barriers that you have to cross? There's kind of two really big ones.

The first one is launch, and we feel like we're on a path to really solving that. The second one is you would have to either assemble a team of spacecraft experts or build your own satellite.

I've seen so many startup companies raise a ton of capital and go out there and build their own satellite bus or first satellite. And, you know, satellite bus absorbs a tremendous amount of capital and time and team and everything and, if the satellite bus fails, it doesn't matter what your sensor or your payload does because it never gets an opportunity to work.

It just seems to me that that part of the equation should be commodified. No startup company, no government should ever have to worry when they put their satellite up there will it work? Will it turn on? Will it generate power? Will it communicate? Those sorts of things should just be a fundamental yes, and everybody should be worrying about their sensor, their payload, how they're gonna make money.

What we've done with photon is remove all those constraints. So, anybody can come now with their payload or their concept and integrate it onto a photon satellite bus which is also part of the electron launch vehicle and launch and the satellite piece is just taken care of completely.

It's a bit of a different model for the industry, but it really, truly democratizes access to space.

This interview has been edited for length and clarity.