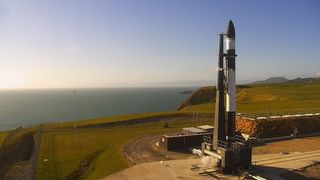 The Electron Rocket is the workhorse vehicle of the private spaceflight company Rocket Lab, which provides launches for small satellites to Earth orbit. The rocket's two stages stand 57 feet tall (15 meters) on the launchpad, and it can take payloads of up to 500 lbs. (227 kilograms) during each mission.

Rocket Lab charges $5 million per flight for Electron, though the cost is usually split up among the multiple small satellites, such as CubeSats, that can occupy the rocket's bulk. Electron is diminutive compared to most rockets that send cargo to orbit; SpaceX's Falcon 9 is 229 feet (70 m) tall, and each of its missions costs about $62 million.

How does Electron Rocket work?

The first-stage booster for Electron uses nine linked Rutherford engines (a liquid-propellant engine developed by Rocket Lab), while a single, vacuum-optimized Rutherford engine powers the second stage. These engines are produced at Rocket Lab's Huntington Beach, California, headquarters, with the rest of the Electron booster assembled at the company's factory in Auckland, New Zealand.

Rocket Lab is in the process of developing reusable boosters. Unlike similar technology used by private space companies like SpaceX and Blue Origin, whose boosters land autonomously, Electron's are intended to be snagged out of the air with a helicopter as they return to Earth.

Electron has launched eight times, with each mission given a whimsical name. The rocket's first (partially successful) flight was called "It's a Test" and occurred in May 2017. The second, fully successful launch was called "Still Testing," while the third was named "It's Business Time."

The next mission was called "This One's for Pickering" after pioneering New Zealand rocket engineer William Pickering, followed by “Two Thumbs Up,” "That's a Funny-Looking Cactus," "Make it Rain" and the eighth mission, "Look Ma, No Hands," which occurred in August 2019. The company hopes to eventually launch weekly missions.

One of the vehicle's most famous pieces of cargo was the disco-ball-shaped Humanity Star, which blasted off on Jan. 21, 2018, on Rocket Lab's second launch. The extremely reflective object was meant to be highly visible in the night sky and provide a way of "looking beyond our immediate situation, whatever that may be, and understanding we are all in this together as one species, responsible collectively for innovating and solving the challenges facing us all," said company CEO Peter Beck. But the disco ball's trip was cut short as it fell back into Earth's atmosphere just two months later.