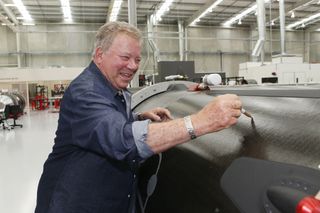 Rocket Lab aims to boldly go where no spaceflight company has gone before.

On Thursday (Oct. 11), the California-based startup unveiled a huge new facility in Auckland, New Zealand, that's designed to enable fast mass production of the company's Electron rocket. And iconic "Star Trek" actor William Shatner was on hand to lend some more excitement to the proceedings.

Electrons will undergo final assembly at the new 80,700-square-foot (7,500 square meters) facility, Rocket Lab representatives said. (The company already has a production facility at its headquarters in Huntington Beach, near Los Angeles, which will continue to operate.) A new mission control center built into the Auckland site will command each Electron rocket launch, the representatives added. [Changing the Launch Equation: Q&A with Rocket Lab CEO Peter Beck]

Rocket Lab aims to make spaceflight much more frequent and accessible with the 57-foot-tall (17 m) Electron, which can launch 500 lbs. (225 kilograms) to Earth orbit for about $5 million per liftoff.

Electrons have flown two demonstration missions to date, lifting off from Rocket Lab's New Zealand launch site in May 2017 and again in January of this year. The rocket deployed four satellites into Earth orbit on that second flight, including three tiny Earth-observing cubesats and a reflective, spherical spacecraft called the Humanity Star.

That spacecraft is no more; it was designed to catch skywatchers' eyes for a brief time, and it has already fallen back into Earth's atmosphere.

The Electron's first operational commercial launch, called "It's Business Time," is on track for a November launch. And Rocket Lab envisions big things happening shortly thereafter: The company aims to launch one mission per month beginning next year and one per week by the end of 2020.

"Every detail of the Rocket Lab launch system has been designed to provide small satellites with rapid and reliable access to space," Rocket Lab founder and CEO Peter Beck said in a statement. "This requires the ability to manufacture launch vehicles at an unprecedented rate, so we've expanded our global production capability to build and launch an Electron rocket to orbit every week."

Not all of these flights will depart from the New Zealand launch site, which lies on the North Island's Mahia Peninsula. Rocket Lab is in the final stages of selecting another launch site in the United States; that decision should be made public very soon, company representatives have said.