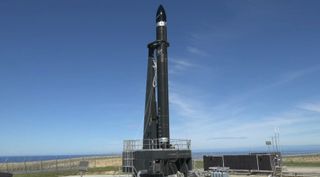 Spaceflight President Curt Blake told SpaceNews the company bought the "vast majority" of the lift capacity on all three missions, giving Spaceflight control of the schedule for each. Blake declined to say if Spaceflight received a discount for placing a three-launch order.

Spaceflight, as an aggregator of launch demand for cubesats and other small spacecraft, already has customers lined up to fill all three missions, he said. [Related: Watch Rocket Lab's Latest Electron Launch]

Spaceflight's first Electron launch is slated for late this year, followed by the second and third in early 2019, each from Rocket Lab's New Zealand spaceport.

Rocket Lab, which has reached orbit with Electron just once in two attempts, is shooting for its third launch no earlier than June 22.

The first Electron launch will carry a BlackSky Earth-observation satellite, along with other spacecraft. Spaceflight Industries raised $150 million in March to fund the first 20 satellites in a planned constellation of 60 satellites. Spaceflight launched a demo satellite in 2016 on an Indian Polar Satellite Launch Vehicle.

Spaceflight's second launch of the trio will carry unspecified spacecraft from "commercial and government organizations," the company said.

Spaceflight previously bought a dedicated Electron launch in 2017, but has not said when that mission will occur. Blake said dedicated missions with small and medium-sized launch vehicles are becoming more important for Spaceflight.

"There will be more for sure," he said.