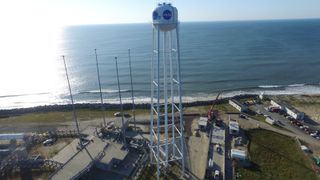 Rocket Lab will start flying from the United States just a few short months from now, if all goes according to plan.

"We'll have the site activated by the end of the year," Rocket Lab CEO Peter Beck told Space.com. "So, it'll be fully ready to go. But the [first] flight will be early next year."

Rocket Lab has already launched eight missions, including test flights, from its other site, Launch Complex 1 (LC-1) on New Zealand's North Island. LC-1 is licensed for up to 120 flights per year, company representatives said. LC-2, which is designed for government missions, will host up to 12 launches per year.

As that potential LC-1 launch cadence shows, Rocket Lab has bold ambitions. The company aims to greatly increase access to space by flying very frequently and at a reasonable price. The 57-foot-tall (17 m) Electron can loft a maximum of about 500 lbs. (225 kilograms) to orbit on each roughly $5 million liftoff.

The Electron is currently an expendable vehicle, but Rocket Lab is working to recover and reuse the first stage. The booster won't land propulsively like the first stages of SpaceX's much larger Falcon 9 rocket, however; Rocket Lab aims to snatch falling Electrons out of the sky using a helicopter.

SpaceX founder and CEO Elon Musk has stressed the importance of reuse in slashing costs. But Rocket Lab's reasoning is a bit different.

"It's not about cutting costs at all, to be honest," Beck said. "It's about increasing production. That's the sole reason we're doing it."

About 70% of the time and money spent building an Electron goes into the first stage, he explained. So, if Rocket Lab can routinely recover and reuse these boosters, "it's literally hundreds of square feet of production floor that we don't have to build."

Rocket Lab's ninth mission, which will launch a satellite for California-based company Astro Digital, is scheduled to take place from LC-1 during a two-week window that opens on Oct. 14. On the launch after that, Rocket Lab will try to take some serious strides toward rocket reuse.

The company won't attempt to catch the descending booster on that mission, whose launch date and customer have not yet been announced. But Rocket Lab will actively guide the Electron first stage down and get a lot of data about that process, and about the reentry environment, Beck said.

It's tough to simulate just what the booster will experience on its way down to Earth. So, the exercise on the downward part of flight 10 could show that Rocket Lab is very close to pulling off reuse, or it could reveal that the company is still miles away, Beck said.

"So, I'm not very keen to make estimates of when we're going to have a crack at catching one," he added.

Electron isn't the only hardware that Rocket Lab builds with an eye toward making space more accessible. The company has also developed a satellite platform called Photon, which is designed to integrate a wide variety of sensors and equipment. The idea is to let customers concentrate on their data-gathering payloads, and not have to worry about building an entire spacecraft.