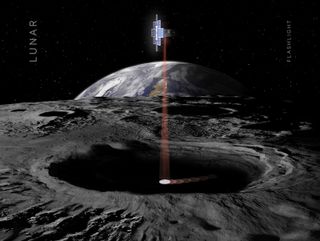 The Lunar Flashlight mission, selected by NASA's Advanced Exploration Systems, is a project from the Jet Propulsion Laboratory and the agency's Marshall Space Flight Center. In the mission, a cubesat would use lasers to look for water ice deep in lunar craters.
(Image: © NASA/JPL-Caltech)

During a talk at the Beyond the Cradle conference on March 14 from the Massachusetts Institute of Technology Media Lab, Larry James, the deputy director of NASA's Jet Propulsion Laboratory, gave the audience a sneak peak into the exciting scientific missions that NASA and JPL plan to launch in the near future and the new approaches behind some of these missions.

NASA already plans to further explore Mars' atmosphere with the spacecraft MOXIE in 2020 and the outer planets with the Europa Clipper in 2023. In addition, James said, the agency and JPL are looking for ways to make exploration more cost effective and compact. Enter the cubesat.

These satellites, which NASA classifies as a nanosatellite research spacecraft, can be as small as 4 inches by 4 inches by 4 inches (10 centimeters on a side) and weigh less than 3 lbs. on Earth (1.4 kilograms). While still packing a scientific punch, they are simple enough that NASA has partnered with high schools and universities to give future scientists and engineers a chance to help design cubesat experiments that can fly on real launches.

James said that the recent launch of the InSight Mars lander, whose arrival at the Red Planet was tracked by two little cubesats called MarCO, is evidence of just how useful these satellites can be.

"[Today], we talked a lot about the democratization of space," said James. "And I think these smaller spacecrafts are going to allow us to do that. Without [MarCO], we would not have had that real-time data of the entry, descent and landing of the InSight mission."

The two MarCO cubesats were the first of their kind to travel into deep space and were able to relay information about the mission directly to Earth in real time. With this success paving the way, NASA and JPL are looking at launching two cubesat interplanetary missions in the near future.

The first mission on the horizon, slated for launch in 2020, is called Lunar Flashlight. That mission will be not only the first cubesat mission to reach the moon, but also the first to use NASA’s new ammonium driven green propulsion fuel, and lasers to search for water ice on the lunar surface, James said. This cubesat will be six times the size of the small 4 inch cubed model, will shine infrared lasers into the moon's permanently shadowed craters, and an onboard spectrometer will measure surface reflection and composition to help scientists better understand the lunar surface and prepare for possible future rover missions.

"We heard about the water on the moon," said James. "[Lunar Flashlight] uses a laser to actually look for that water and measure what it is in those dark craters on the surface of the moon. We're using a cubesat to do that, to do real science."

The second planned NASA cubesat mission, which is still in development and has yet to receive a launch date, would measure Venus' atmosphere and is called Cupid's Arrow. James said the mission is being proposed in partnership with India to launch alongside that nation's next Venus mission. Cupid's Arrow would study the noble gases of Venus' atmosphere to help scientists get a better picture of how this once Earth-like planet diverged so drastically from ours in its geophysical history. This would help future missions understand the difference between an Earth-like exoplanet and a Venus-like exoplanet.

Along with MarCO, these two missions will show how useful these small satellites can be in exploring our solar system, James said. And that’s just the beginning.

"I think there's this revolution of cubesats," said James, "that really is going to change how we can put systems into orbit that do real missions."