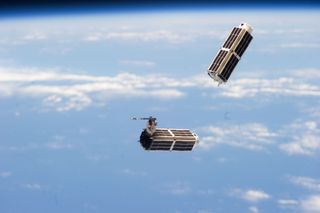 Two of the 28 Dove cubesats that make up Planet Lab's "Flock 1" constellation are seen deploying into orbit from the International Space Station on Feb. 11, 2014.
(Image: © NASA)

CubeSats are miniature satellites that have been used exclusively in low Earth orbit for 15 years, and are now being used for interplanetary missions as well. In the beginning, they were commonly used in low Earth orbit for applications such as remote sensing or communications. As of mid-2018, a pair of CubeSats has been deployed on a mission flying to Mars, and other CubeSats are being considered for the moon and Jupiter.

The CubeSat design was first proposed in the late 1990s by two professors: Jordi Puig-Suari of California Polytechnic State University and Bob Twiggs of Stanford University. They were trying to help students gain engineering experience in satellites, which are traditionally expensive to build and launch. The idea for the CubeSat came in part from the miniature toy craze of the day, Beanie Babies, according to Spaceflight Now. Inspired by the individualized stuffed animals, Twiggs' idea was to allow students to build their own miniature satellites.

The basic design of a CubeSat is a 10-centimeter (4-inch) cube with a mass of less than 1.33 kilograms (2.93 lbs.), the article added. But variations on the theme are possible. CubeSats can also be designed to encompass two, three or six 10-centimeter units for more complicated missions.

CubeSats reduce launch costs in two fundamental ways. They don't weigh that much, which means a rocket doesn't need a lot of fuel to heft them. In most cases, they also share a rocket with a larger satellite, making it possible to get to space on the coattails of the heavier payload.

There are some design challenges with CubeSats, however. The electronics are smaller and are therefore more sensitive to radiation. Because they are small, they cannot carry large payloads with them. Their low cost also means they are generally designed to last only a few weeks, months or years before ceasing operations (and for those in low Earth orbit, falling back into the atmosphere.)

The first six CubeSats were launched in June 2003 from Russia's Plesetsk launch site. At the time, according to a 2004 Space.com article, the going rate for a CubeSat's launch was about $40,000, which is a bargain compared to a typical satellite (many are millions of dollars.)

CubeSats were made possible by the ongoing miniaturization of electronics, which allows instruments such as cameras to ride into orbit at a fraction of the size of what was required at the beginning of the space age in the 1960s.

For the first decade, most CubeSats that flew came from university or research applications. Only a handful of satellites launched every year; then in 2013, the number of launches suddenly numbered in the dozens. It was in that year that the commercial sector began to launch satellites, according to SpaceDaily.

New technologies are being pioneered to improve the use of CubeSats, such as a 2017 NASA parachute project that could land the small satellites without the need of boosters. And several high-profile projects have been announced in the public sector, including NASA "swarms" of Earth-observing CubeSats, the adoption of a satellite by public radio station NPR, and a Canadian student CubeSat competition.

There have been more than 2,100 CubeSats and nanosatellites as of mid-2018, according to nanosats.eu. Among the prominent uses of Earth-orbiting CubeSats today:

Some space industry experts worry that the popularization of CubeSats will create a lot of junk in low-Earth orbit, as companies and researchers race to get their ideas into space without considering the long-term consequences. In March 2018, the Federal Communications Commission alleged that one U.S. company launched several small satellites without permission after the FCC blocked the launch, saying the satellites were too small for sensors to track.

Moving outside of Earth orbit

Starting in 2018, CubeSats began to venture outside of Earth orbit. Here are some of the projects under way, or still being planned:

Mars Cube One (MarCO) — the first CubeSats to leave Earth — launched on May 5, 2018, along with NASA's InSight lander. InSight is expected to land on Mars on Nov. 26, 2018; it is currently en route and the CubeSats are flying just behind it, as they separated independently from the rocket during launch and are running on solar power.

The CubeSats are nicknamed "WALL-E" and "Eve" after the 2008 animated Pixar movie "WALL-E," which follows the adventures of robots in space. When InSight lands, the CubeSats will attempt to send data back to Earth about its descent. This is a test flight and the information will not be critical, as the Mars Reconnaissance Orbiter will do the same job. MarCO's mission will end shortly afterwards.

NASA's first Space Launch System test launch in 2019 will pioneer the rocket expected to bring humans out of low Earth orbit for the first time since the 1960s. The initial, uncrewed launch will include up to 13 microsatellites. Concept ideas include Lunar Flashlight, which reflects sunlight to peer into permanently shadowed craters on the moon, and NEA Scout, which will use a solar sail to fly to near-Earth asteroid 1991VG.

NASA is considering a mission to Jupiter's icy moon Europa in the 2020s or 2030s. In 2014, NASA said it was considering including CubeSats on the mission, which would carry out functions including "reconnaissance for future landing sites, gravity fields, magnetic fields, atmospheric and plume science, and radiation measurements." NASA confirmed the CubeSats would be included in May 2018, and asked the science community for their ideas.

The European Space Agency and NASA previously considered a joint mission to investigate the asteroid 65803 Didymos and try to move its moon via an impactor. The mission wass called Asteroid Impact & Deflection Assessment (AIDA) mission. For the European part, they considered including two CubeSats to do supplemental observations. The Europeans elected not to fund their part of the mission in 2016 to give more money to the ExoMars rover mission, but NASA is continuing development on its part. The launch has been delayed into the 2020s.