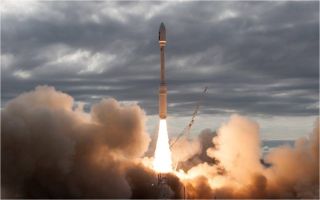 After tackling topics such as how to make a T-shirt and how to drill for oil, the "Planet Money" podcast team at National Public Radio has a new topic to explore: how to launch a satellite into space. The team did just that for real a few weeks ago.

"We wanted something that was clearly different and exciting," Robert Smith, host of "Planet Money," told Space.com. The team was thinking about recent news and remembered a SpaceX rocket launch had just happened, he said.

"'Why don't we go to space?' [we asked]. I, for one, did not think it was possible at all," he said. "I just did not. I thought maybe we could watch a rocket go off, but how would you even start?" [Cubesats: Tiny, Versatile Spacecraft Explained (Infographic)]

The satellite series began Wednesday (Nov. 29). It continues tonight (Dec. 1), Wednesday (Dec. 6) and Friday (Dec. 8). Two more episodes will air sometime in January. You can follow the series at https://www.npr.org/sections/money/ and www.npr.org/spacemission.

With the help of listeners and some representatives from the space industry who are used to launching amateur experiments, the "Planet Money" team began hunting down options to launch a satellite. The team quickly realized that a journalist's deadline and a space industry deadline are very different; even some small cubesat missions take years to develop.

The elegant solution was to "adopt" a satellite, "Planet Money" producer Elizabeth Kulas told Space.com. The team got to name a mini-satellite in production by Planet Labs (now called Planet), a company that observes Earth with a swarm of small "Dove" satellites.

No money was exchanged and no contract was signed, but NPR did receive a few perks from the arrangement. Specifically, the team got to laser-etch something of their choosing on the satellite. "The satellite says on the side, 'Hello and welcome to 'Planet Money'' in the waveform of a voice," Smith said, referring to a reproduction of the waveform that statement produces, spoken out loud.

The team also had to agree on a name. Given that "Planet Money" talks about economics, several puns were thrown around. "No Free Launch," "Money to Burn" and "Battleship Free Enterprise" were among the names considered, Kulas said. But in the end, the podcast went with the simple "Pod 1." "Pod" came from the word "podcast," and "1" is supposed to refer to the first of a series of NPR satellites (which Smith said was meant more as a joke than an actual possibility).

The satellite launched on Halloween (Oct. 31) aboard an Orbital ATK Minotaur C rocket from Vandenberg Air Force Base in California. Smith was among the members of "Planet Money" who saw the launch in person. He said he's listened over and over again to the excitement he had in his voice on that day. "'It's so bright. Go out there and look at it!' It was super-exciting." [Planet Labs Photos of Earth from Space (Gallery)]

"Space fever" and choosing a mission

While the launch itself was exciting, the team realized it had forgotten something key to its work: choosing something for the little satellite to do as it collects imagery of Earth from space. There still is some time to figure this out, however, as Pod 1 won't start its work until after configuration. That means the mission will begin no earlier than February. The satellite itself is expected to last two or three years before atmospheric drag from its low-Earth orbit causes the spacecraft to enter the atmosphere and burn up.

"A lot of people [we talked to] said, 'You know, this right here is one of the problems you see in the space world,'" Smith acknowledged. "People are so excited to go to space that they haven't spent as much time as perhaps they should [thinking] about what kind of data you're going to get, and how you're going to get that data, and what the business plan is. We'd fallen into the trap of space fever."

As will be discussed in the podcast tonight (Dec. 1), the team is considering a couple of options. One is to track the global avocado supply to try to predict guacamole levels during the Super Bowl — and how much the guacamole will cost. "It's kind of a joke," Smith acknowledged, but he said it is a good way to show listeners the path of commodities and supply chains.

Another possibility is following the lead of economics researchers who often try to improve conditions for developing countries, Smith said. For example, insurance helps farmers in places like Ghana grow more crops. But to predict the yield, dozens of people need to go to remote villages to measure the height of a crop like corn — a process that could be simplified using satellite imagery.

The "Planet Money" team said that it will keep listeners updated on how the mission is doing and will reveal what the data will be used for.