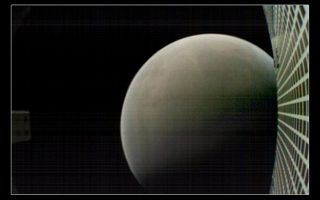 After relaying live communications during the touchdown of NASA's InSight Mars lander on Nov. 26, 2018, the tiny MARCO-B cubesat sent back this farewell image of the Red Planet.
(Image: © NASA/JPL)

Just a day before the landing, however, MarCO-B, "suddenly did not appear" during the remote check-in with engineers at NASA's Jet Propulsion Laboratory (JPL), mission chief-engineer Andrew Klesh said during a presentation at the International Astronautical Congress here on Friday (Oct. 25).

The team spent all day looking at the fault tree to fix the issue, Klesh recalled. "At 6:05 a.m. [California time] the next morning, MarCO-B shows up just on time," apparently recovering automatically from an attitude-control issue, Klesh said. He proudly told mission managers at 6:30 a.m. that both cubesats were ready to go.

At that point, it was too late to make any changes. JPL had already sent its last commands to InSight and MarCO through NASA's Deep Space Network (DSN) of telescopes that communicate with spacecraft far out in the solar system. So the engineers could only watch and wait. "We didn't know what was going to happen [during landing] in a few hours' time," Klesh said.

Luckily for the team, MarCO-A (and its twin) both popped into communications at 12:14 p.m. and succeeded in relaying data from the InSight touchdown, sending back valuable information about the dangerous entry, descent and landing phase to NASA engineers to plan for future missions. MarCO-B even took a dramatic farewell photo of Mars using a $200 camera, quite a feat for a briefcase-size probe on a technology-demonstration mission. (MarCO-A and MarCO-B did not attempt a Red Planet landing; both spacecraft flew by Mars and kept on going.)

Best yet, InSight touched down safely, and the team figured out why MarCO-A had briefly vanished. The satellite's star tracker, which is used for navigation, "was blinded by Mars-shine," Klesh said.

"This is another lesson learned along the way: It's not only what happens at the start of the mission [that is important], but what happens when you get to another planet itself," Klesh added.

MarCO, the first cubesat mission ever to leave Earth orbit, is the first such set of spacecraft to deal with a planetary arrival. "This is not something we usually have to worry about with small spacecraft," Klesh acknowledged.

The idea of MarCO first came about because NASA's Mars Reconnaissance Orbiter would not be in the right orbital area to beam home InSight data during the landing, Klesh said. The InSight team was adamant that it wanted landing data, because "humanity has failed more often than we succeeded" in putting spacecraft down safely on the Red Planet.

So the solution was two cubesats riding in "economy class," next to the nozzle of one of the United Launch Alliance Atlas V rocket stages that lifted InSight off Earth's surface in March 2018. (InSight was in "first class" in the rocket fairing and enjoying a much smoother ride, Klesh joked.)

Klesh showed a video of people at JPL expressing (playful) skepticism at the proposal, with one even giving a dramatic shrug on camera. "It's always great to have the support of your colleagues," Klesh said to audience laughter.

But the concept ended up being valuable as NASA tries to squeeze the most out of its interplanetary missions. The agency is already developing additional cubesats to go beyond Earth orbit, such as Lunar Flashlight to peer into moon craters and NEA (Near-Earth Asteroid) Scout, which will gather data on small worlds whizzing by our planet. These two little probes, and a number of others, are scheduled to fly on the first launch of NASA's new Space Launch System rocket in 2020 or 2021.

MarCO carried innovative technology to communicate with the DSN, and the first few days in space went just as planned. The two little craft separated from the Atlas V, performed an in-flight simulation of their duties at Mars and passed routine checks.

But along the way, MarCO-B sprung a leak in one of its fuel lines. The team borrowed a play from the long mission of NASA's planet-hunting Kepler space telescope and used the constant stream of particles from the sun, or solar radiation pressure, to keep that cubesat in the right attitude.

Klesh said he is proud of MarCO's results: pictures sent back from Mars, the ability to relay back 97% of the data the mission collected and so much worldwide media excitement that the mission received 5 billion media impressions. "We took quite a step forward as we traveled ... out to Mars," Klesh said. "We changed the perception of the achievable."