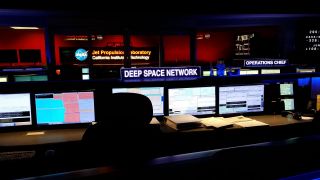 The Deep Space Network is one of the facilities at NASA's Jet Propulsion Laboratory, where many of the agency's space missions are designed, built and operated.
(Image: © Nola Taylor Redd)

Long-distance phone calls have nothing on NASA's Deep Space Network. Three stations scattered around the world make it possible to communicate with spacecraft as they journey through the solar system, and even as they leave it.

The Deep Space Network (DSN) is a part of that great network, sending home images of the first moonwalk, playing a critical role in the rescue of the Apollo 13 astronauts, and returning the first-ever images of another world.

Today, the DSN has three facilities spread roughly 120 degrees around the globe. At any given time, a spacecraft trying to send home a message should be within line of sight of one of the three stations. Each station contains multiple parabolic dishes, including one dish each that is 230 feet (70 meters) across.

The DSN is capable of receiving very low-strength signals from distant spacecraft.

"'Very low' might be an understatement," according to NASA's Deep Space Network Fact sheet. "The total signal power arriving at a network antenna from a spacecraft encounter among the outer planets can be 20 billion times weaker than the power level in a modern digital wristwatch battery."

Three stations for the solar system

In January 1958, the Jet Propulsion Laboratory (JPL), then under the umbrella of the U.S. Army, deployed portable radio tracking stations in Nigeria, Singapore and California to receive signals from the first successful U.S. satellite, Explorer 1. Only a few months later, JPL was transferred from the Army's jurisdiction to NASA's, where it began to design and execute robotic exploration programs.

It didn't take long for NASA to realize that a single, separately managed and operated communications facility that could accommodate all deep space missions would be more economical than having each project acquire and operate its own specialized communication network. DSN was born.

With JPL located just outside of Los Angeles, it shouldn't be a surprise that the first location chosen for a Deep Space Station was just down the road. Goldstone sits in the Mojave Desert, north of Barstow, where a single road points toward Ft. Irwin. The location was chosen because of its remoteness from power lines, commercial radio and television transmitters, which can impede signals from distant spacecraft.

The Canberra Deep Space Communication Complex (CDSCC) opened in 1965. During the mid-1960s, NASA built three tracking stations in the Australian Capital Territory. Originally known as the Tidbinbilla Tracking Station, the CDSCC is the only NASA tracking station still functioning in Australia today. During the Apollo program, one of its antennas was used to track the Apollo Lunar Module. Antennas at the other stations also helped support the Apollo mission and communicate with the Apollo Command Module.

The DSN helped Mission Control stay in touch with the Apollo astronauts. It relayed the first TV images of astronaut Neil Armstrong stepping on the moon in 1969. During Apollo 13, when limited battery power and an inability to use the high-gain antennas meant the crew was unable to communicate with NASA's Manned Space Flight Network, the largest DSN antenna, along with Australia's Parkes Observatory radio telescope, was critical in bringing the astronauts home.

In 1965, the DSN received images from NASA's Mariner 4 spacecraft, the first close-ups of the Mars. In 1974, DSN returned Mariner 10 images of Mercury. When NASA's twin Voyager spacecraft buzzed by Jupiter, Saturn and Neptune, DSN brought home the first close-ups of these planets and their rings and moons. DSN also carried the data conveying the famous self-portrait of Earth known as the "Pale Blue Dot." It continues to monitor the Voyager spacecrafts' entry into interstellar space.

In addition to communication, the DSN also performs science. By monitoring signals from its satellites, it is able to provide a precise distance from Earth to the sender. Just before the Cassini spacecraft made its death dive into Saturn in 2017, DSN's measurements of its final signals allowed researchers to calculate the mass of the B-ring, a decades-old mystery. The station's antennas can perform radar science, bouncing waves off passing asteroids, and radio astronomy, looking at radio sources such as pulsars and quasars.

"People everywhere appreciate the fact that the U.S. was willing to share its program so effectively with them by means of modern communications," astronaut Neil Armstrong told tracking network personnel on March 18, 1972. "To those of you out there on the network who made all of the electrons go to the right place at the right time — and not only during Apollo 11 — I would like to say thank you."

Sometimes, two stations work together to bring home the information, such as with NASA's Galileo mission to Jupiter. A broken antenna on the spacecraft meant engineers had to come up with a different plan to bring home the scientific data.

"When I worked on Galileo, we did international arraying between Australia and Goldstone and Spain and Goldstone," she said.

That challenge emphasized the vital role that the DSN plays in bringing home science from the spacecraft.

"If it wasn't for the DSN, there wouldn't be any science, because nobody could listen to [the spacecraft]," she said.

JPL continues to control the DSN from its facility in Pasadena, California. Set adjacent to the mission control center, the DSN control room contains rows of computer banks and several large screens that track the various missions. The room itself is dark, lit primarily by the glow of the screens. At least five engineers oversee and operate the DSN seven days a week. Subsystem engineers like Finley are found in the building across the street.

According to Jim McClure, manager of mission control, former JPL Director Charles Elachi was describing how the control center collects information from both inside and outside the solar system. "This must be the center of the universe!" Elachi reportedly said.

Now, a plaque on the floor of the room makes that title official. In a sunken glass box in the floor sits a seal. "JPL" is written boldly in the middle, encircled by the words "NASA" and "the California Institute of Technology." An "X" divides the seal into four wedges, with an image commemorating the various types of missions (telescopes, landers, orbiters and flybys) in each one. The words beneath the seal proclaim the spot to be "The Center of the Universe."