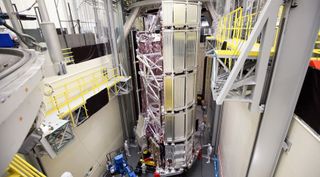 WASHINGTON — NASA is suffering growing problems with cost and schedule on its major programs, driven by continued issues with two of its highest profile efforts.

In its annual "Assessments of Major Projects" report issued May 30, the Government Accountability Office found that average cost growth and schedule delay for large NASA programs grew in 2018, with the expectation of further growth.

"The cost and schedule performance of NASA's portfolio of major projects continues to deteriorate," the report bluntly concluded. The average schedule delay for NASA programs grew in 2018 to 13 months, the highest recorded by the GAO since it started its annual survey of NASA programs a decade ago. Cost growth rose to 27.6 percent, the highest since 2014.

The biggest factor in the increase is the James Webb Space Telescope. Last year NASA delayed the launch of the mission to March 2021 and said its cost would increase by about $800 million because of several problems during integration and testing of the observatory's spacecraft element. Since its 2009 baseline, JWST's total cost estimate has grown by 95 percent, from just under $5 billion to nearly $9.7 billion, while its launch has been delayed by nearly seven years.

A secondary factor is the Space Launch System, which has suffered problems with the assembly of its core stage. "Boeing underestimated both the complexity of engine section assembly and the time and manpower that would be needed to complete the effort, which has contributed to cost growth," the report noted, referring to the prime contractor for the core stage.

Those problems have increased the cost of SLS by 10 percent from its 2014 baseline, to $10.7 billion, and delayed its launch by at least 19 months to June 2020. That date is likely to slip further, agency officials have acknowledged, as they seek to keep the launch from slipping into 2021. The GAO noted that the June 2020 launch date had "6 to 12 months of risk."

Several other programs also experienced cost increases in the latest report, including Orion, Mars 2020 and the Space Network Ground Segment Sustainment, an ongoing project to upgrade ground stations used by NASA missions. NASA's Ionospheric Connection Explorer, or ICON, mission, also suffered a delay due to issues with its Pegasus XL rocket, and not with the spacecraft itself.

The GAO report warned of continued potential for cost and schedule growth. Besides the schedule risk with SLS, the reported warned that more delays are possible with JWST as it begins final integration and testing of the spacecraft this fall, when the spacecraft element is joined to the mirror and instruments. "Our prior work has shown that integration and testing is the phase in which problems are most likely to be found and schedules tend to slip," the report stated.

In recent weeks NASA and its contractors have emphasized that, despite past problems, both JWST and SLS are going well now. JWST project officials at NASA and prime contractor Northrop Grumman said at a town hall meeting in April that they remained on schedule despite concerns expressed by independent reviewers that the mission was consuming schedule reserve at a high rate. Northrop announced May 30 that the spacecraft element of JWST successfully completed its final thermal vacuum test.

At a May 28 meeting of the NASA Advisory Council's human exploration and operations committee, Bill Hill, NASA deputy associate administrator for exploration systems development, said he thought work on the SLS core stage was back on track after a number of changes, including a shift from vertical to horizontal integration of the components of the stage.

"The team at [Michoud Assembly Facility] is doing amazing work," he said. "In the last few months, Boeing has hit their schedule predictions and hit their marks, and that's encouraging."

While programs like JWST and SLS have driven up average cost and schedule growth, other, smaller, programs have done better. Several such missions reported no cost growth or schedule delays. The Parker Solar Probe, which launched on schedule last August, came in $40.5 million under budget.