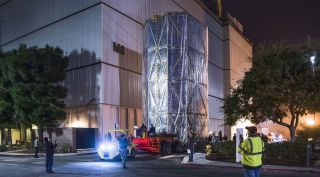 The spacecraft element of the James Webb Space Telescope is moved from one facility to another at Northrop Grumman in December for vibration testing. That work is continuing despite the ongoing government shutdown.
(Image: © Chris Gunn/NASA)

SEATTLE — The ongoing partial government shutdown has upended aspects of a major astronomy conference this week but has not, for now, affected operations of NASA astrophysics missions.

The partial government shutdown triggered Dec. 22 when funding lapsed for a number of agencies, including NASA and the National Science Foundation, has prevented civil servants from those agencies from attending the 233rd Meeting of the American Astronomical Society (AAS) here. The AAS estimated prior to the conference that about 10 to 15 percent of its expected 3,200 registrants would not be able to attend the meeting, the largest annual gathering of astronomers in the United States, because of the shutdown.

Those absences led to the cancellation of a NASA town hall here scheduled for Jan. 7 as well as a separate town hall on the James Webb Space Telescope Jan. 8. That deprived attendees from formal updates on the status of JWST, six months after an independent review led NASA to delay the flagship mission's launch to the spring of 2021.

However, Ken Sembach, director of the Space Telescope Science Institute, responsible for science operations for JWST, assured astronomers that the shutdown is not further delaying work on the mission.

"Work on JWST at Northrop Grumman and at Space Telescope continues despite the government shutdown," he said at an institute town hall Jan. 7. He said that vertical axis vibration testing of the spacecraft element of JWST had finished in the last week, with preparations for additional vibration testing underway this week. "Things are progressing well with the hardware."

The institute, he added, is continuing its own science planning for the mission. "Our goal, as always, is to make sure that everybody is ready to do science on day one," he said. However, he noted the call for proposals for Cycle 1 observations would not be reopened for about a year. That request for proposals was opened last year but put on hold after the latest mission delays.

Near the opposite end of the spectrum of astrophysics missions, the Explorer-class Transiting Exoplanet Survey Satellite (TESS) spacecraft is continuing to collect data despite the government shutdown, said George Ricker, principal investigator for the mission at the Massachusetts Institute of Technology, in a Jan. 7 interview. NASA's shutdown plan calls for operations of spacecraft already in space to continue during the shutdown as part of its requirement to protect property and life.

"We think we're still going to be able to stay on target for the monthly deliveries of data that we have," he said. One of two "pipelines" used to process that data does involve resources at NASA's Ames Research Center, he said, that may not be available if the shutdown continues. The other data processing pipeline, at MIT, is not affected.

"We may have to figure out ways to bypass some of those things to make the data available," he said. "If the shutdown goes on for more than a month or two, there would probably be an impact."

The shutdown may also delay planning for an extended mission for TESS. Proposals for extended missions, as part of NASA's next senior review of astrophysics missions, are due to the agency Feb. 1, but could be delayed. "We have no information as to when that will actually occur," he said.

While NASA employees could not attend the conference, the agency did have a presence in the exhibit hall as its booth was shipped prior to the shutdown. The exhibit is staffed primarily by contractors who are "forward funded" and thus can be at the conference.

Employees of NASA's Jet Propulsion Laboratory are also able to attend the conference since JPL is operated by the California Institute of Technology for the agency, and its staff are Caltech employees rather than NASA civil servants.

"The shutdown will impact us, but on a longer timescale," said Gary Blackwood at a Jan. 5 meeting of NASA's Exoplanet Exploration Program Analysis Group here ahead of the AAS meeting. Blackwood, program manager for the exoplanet exploration program at JPL, said the lab's contracts are forward funded by about four to eight weeks. "I think we're good through January."

An NSF town hall planned for the AAS meeting Jan. 8 will go ahead despite the shutdown thanks to something of a loophole. The director of the NSF's Division of Astronomical Sciences, Richard Green, is not a civil servant but rather a "rotator" on loan to the NSF from the University of Arizona. Because of that status, he is able to work but cannot travel, so he will run the town hall by phone from his home, according to meeting officials.

Despite the workarounds, AAS leadership lamented the absence of government employees at the meeting. "To them I say we miss you, and we wanted you here," said Megan Donahue, a Michigan State University professor of physics and astronomy who is president of the AAS, in remarks opening the conference Jan. 7.

The conference is taking steps to accommodate them, such as streaming plenary sessions and allowing co-authors to present papers. The cancelled NASA and JWST town halls will be rescheduled after the shutdown ends, she said, as webinars rather than in-person events.

Donahue got a standing-room-only audience at the opening session to offer a message to the missing attendees — "Thank you. We miss you." — that she recorded and posted to Twitter.

"Hashtag resist," she added in a stage whisper.