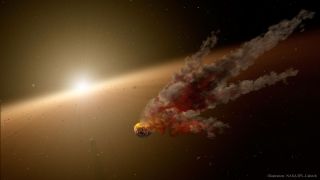 Back in 2016, headlines all over the world blared with news of a possible "alien megastructure" detected orbiting a distant Milky Way star. Now, a team of Columbia University astrophysicists has offered up an explanation for the star's strange behavior that doesn't involve any little green men.

The "alien" point of light in the sky is known as Tabby's star, which was named after Tabetha Boyajian, the Louisiana State University astrophysicist who in 2015 first noticed the unusual patterns in its starlight that others initially attributed to alien construction projects. Boyajian noticed that the star tended to dip in brightness at odd intervals, sometimes slightly and sometimes by significant fractions of its total light. It was also slowly losing brightness over time. She later called it in a TED Talk the "most mysterious star in the universe" because no straightforward astrophysical theory could explain the dimming pattern —  though she also expressed skepticism about suggestions that the dimming was the result of a "megastructure" constructed around the star by an advanced civilization.

Astronomers have since offered a number of alternative explanations for the weird light from the star, which is about 1,500 light-years away in space and known formally as KIC 8462852. They range from swarms of comets to "avalanche-like magnetic activity" within the star. Boyajian conducted follow-up research that showed that the dimming is specific to certain light frequencies, which could be explained if a cloud of dust were responsible, scientists have suggested. This new research explains how that dust might have gotten there.

The new theory from the Columbia team resembles the plot of a disaster film more than a science-fiction space opera. They built on earlier work showing that whatever's causing the dimming is likely locked in an irregular, eccentric orbit around the star. They showed that a disintegrating, orphaned ice moon following such a path could explain the strange dimming.

"It's likely outgassing water or some other volatile material," said Brian Metzger, one of the authors of the new paper.

Over the course of millions of years, that material would form an irregular cloud around the star along the orphaned moon's eccentric orbit, he told Live Science, adding that such a cloud would periodically block some of the star’s light from reaching Earth — just like the effect originally attributed to a Dyson sphere megastructure.

They suspect an orphaned moon, as opposed to a planet, is off-gassing the cloud, because it's difficult to explain how an icy planet could end up in that irregular orbit in the first place. Based on our own solar system, he said, scientists know that solid, rocky bodies tend to make up the inner parts of a system, while bigger, gaseous planets dominate the outer system. And those planets are often orbited by icy moons.

Metzger and his colleagues described orbital calculations in which a planet like Jupiter, orbited by large moons and following an eccentric orbit, gets knocked (perhaps by another nearby star) into a collision course with its host star. As it falls to its doom, the star would rip those moons from their orbits. Most of the moons would fall into the star or fly out of the system, they showed, but in about 10% of all cases, a moon would end up in an eccentric orbit. And, critically, that orbit would likely place the moon within its star's "ice line" — the point within which the star's radiation would blast ice off the moon's surface.

If the moon were made up of the right materials, they wrote, it would start to break apart due to the increased radiation of its new, closer orbit, spilling that material into interplanetary space like a gargantuan comet. And even though we'd never see the moon with our existing telescopes, that spilled material would form a cloud of dust and gas big enough to block Tabby's star's light in strange and unpredictable ways. Over time, the star would appear to get dimmer and dimmer, just like Tabby's star, as the total amount of dust in its orbit increased.

Nothing's certain, of course. Metzger said it's still possible some other phenomenon is creating the effect. But this moon theory offers a compelling explanation for a distant flickering once chalked up (at least in the popular press) to aliens.

The paper, available as a draft online in the preprint journal arXiv, will be published in a forthcoming issue of the journal Monthly Notices of the Royal Astronomical Society.