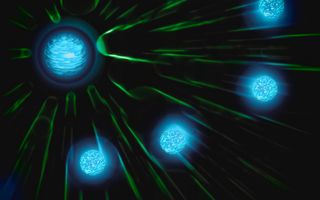 Can two versions of reality exist at the same time? Physicists say they can — at the quantum level, that is.

Researchers recently conducted experiments to answer a decades-old theoretical physics question about dueling realities. This tricky thought experiment proposed that two individuals observing the same photon could arrive at different conclusions about that photon's state — and yet both of their observations would be correct.

For the first time, scientists have replicated conditions described in the thought experiment. Their results, published Feb. 13 in the preprint journal arXiv, confirmed that even when observers described different states in the same photon, the two conflicting realities could both be true. [The Biggest Unsolved Mysteries in Physics]

"You can verify both of them," study co-author Martin Ringbauer, a postdoctoral researcher with the Department of Experimental Physics at the University of Innsbrück in Austria, told Live Science.

This perplexing idea was the brainchild of Eugene Wigner, winner of the Nobel Prize for Physics in 1963. In 1961, Wigner had introduced a thought experiment that became known as "Wigner's friend." It begins with a photon — a particle of light. When an observer in an isolated laboratory measures the photon, they find that the particle's polarization — the axis on which it spins — is either vertical or horizontal.

However, before the photon is measured, the photon displays both polarizations at once, as dictated by the laws of quantum mechanics; it exists in a "superposition" of two possible states.

Once the person in the lab measures the photon, the particle assumes a fixed polarization. But for someone outside that closed laboratory who doesn't know the result of the measurements, the unmeasured photon is still in a state of superposition.

That outsider's observation — their reality — therefore diverges from the reality of the person in the lab who measured the photon. Yet, neither of those conflicting observations is thought to be wrong, according to quantum mechanics.

"Theoretical advances were needed to formulate the problem in a way that is testable. Then, the experimental side needed developments on the control of quantum systems to implement something like that," he explained.

Ringbauer and his colleagues tested Wigner's original idea with an even more rigorous experiment which doubled the scenario. They designated two "laboratories" where the experiments would take place and introduced two pairs of entangled photons, meaning that their fates were linked, so that knowing the state of one automatically tells you the state of the other. (The photons in the setup were real. Four "people" in the scenario — "Alice," "Bob" and a "friend" of each — were not real, but instead represented observers of the experiment).

The two friends of Alice and Bob, who were located "inside" each of the labs, each measured one photon in an entangled pair. This broke the entanglement and collapsed the superposition, meaning that the photon they measured existed in a definite state of polarization. They recorded the results in quantum memory — copied in the polarization of the second photon.

Alice and Bob, who were "outside" the closed laboratories, were then presented with two choices for conducting their own observations. They could measure their friends' results that were stored in quantum memory, and thereby arrive at the same conclusions about the polarized photons.

But they could also conduct their own experiment between the entangled photons. In this experiment, known as an interference experiment, if the photons act as waves and still exist in a superposition of states, then Alice and Bob would see a characteristic pattern of light and dark fringes, where the peaks and valleys of the light waves add up or cancel each other out. If the particles have "chosen" their state, you'd see a different pattern than if they hadn't. Wigner had previously proposed that this would reveal that the photons were still in an entangled state.

The authors of the new study found that even in their doubled scenario, the results described by Wigner held. Alice and Bob could arrive at conclusions about the photons that were correct and provable and that yet still differed from the observations of their friends — which were also correct and provable, according to the study.

Quantum mechanics describes how the world works at a scale so small that the normal rules of physics no longer apply; over many decades, experts who study the field have offered numerous interpretations of what that means, Ringbauer said.

However, if measurements themselves aren't absolutes — as these new findings suggest — that challenges the very meaning of quantum mechanics.

"It seems that, in contrast to classical physics, measurement results cannot be considered absolute truth but must be understood relative to the observer who performed the measurement," Ringbauer said.

"The stories we tell about quantum mechanics have to adapt to that," he said.