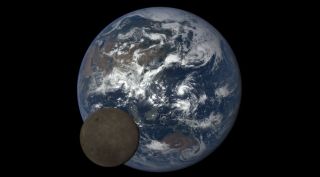 While DSCOVR's primary mission is monitoring the solar wind, its EPIC instrument provides full-disk views of the Earth, sometimes capturing the moon as it passes between the Earth and the spacecraft.
(Image: © NASA)

WASHINGTON — A joint NASA/NOAA spacecraft that monitors space weather and provides imagery of Earth has been offline for more than a week because of a problem with its positioning system.

The Deep Space Climate Observatory, or DSCOVR, spacecraft went into a "safehold" June 27, interrupting its science observations from its perch at the Earth-sun L-1 Lagrange point, 1.5 million kilometers from the Earth in the direction of the sun.

NOAA spokesman John Leslie said July 5 that engineers placed the spacecraft into safehold to "first diagnose and then work to fix a technical issue in the system that maintains the satellite's position." While that work is underway, he said, the spacecraft is not returning data.

The primary mission of DSCOVR, launched in February 2015, is to monitor solar wind conditions, providing advance notice of space weather events. While DSCOVR is in safehold, Leslie said NOAA's Space Weather Prediction Center will instead rely on data from the Advanced Composition Explorer (ACE) and Solar and Heliophysic Observatory (SOHO) spacecraft, which, like DSCOVR, are at the Earth-sun L-1 point, as well as instruments on weather satellites in geostationary Earth orbit.

DSCOVR has suffered a number of safeholds in the past, but those typically have lasted only a matter of hours. Engineers speculated that those earlier safeholds were caused by cosmic ray hits on spacecraft electronics. Leslie didn't give a timetable for resuming normal operations of DSCOVR.

While DSCOVR's primary mission is space weather monitoring, the spacecraft is perhaps best known for an Earth-facing camera called Earth Polychromatic Imaging Camera (EPIC). That camera takes full-disk images of the Earth that can be used for global monitoring of atmospheric ozone and aerosols, as well as clouds and vegetation.

EPIC dates back to the original mission for DSCOVR more than 20 years ago. NASA proposed the mission, then called Triana, at the request of Vice President Al Gore to provide that full view of the Earth. The mission was put on hold early in the administration of President George W. Bush, with the spacecraft put into storage. The Obama administration resurrected the mission under the DSCOVR name and with a new emphasis on space weather monitoring.

The Trump administration, though, proposed terminating EPIC operations. Its NASA budget requests for fiscal years 2018 and 2019 included no funding for EPIC, proposals that did not affect the overall DSCOVR mission, funded by NOAA. Congress rejected those proposals, explicitly including funding for DSCOVR operations in their final appropriations bills.

NASA did not repeat that effort to end funding of DSCOVR in its fiscal year 2020 budget request. The agency's budget proposal sought $1.7 million for DSCOVR operations, the same amount it received in 2018.