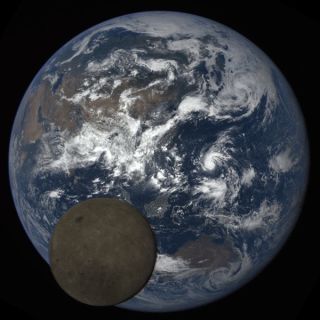 The moon has photobombed Earth again.

For the second time in a year, the Deep Space Climate Observatory (DSCOVR) satellite has captured a stunning time-lapse video of the moon crossing the sunlit face of Earth.

"For the second time in the life of DSCOVR, the moon moved between the spacecraft and Earth," DSCOVR project scientist Adam Szabo, of NASA's Goddard Space Flight Center in Maryland, said in a statement. "The project recorded this event on July 5 with the same cadence and spatial resolution as the first 'lunar photobomb' last year."

DSCOVR — a joint mission involving NASA and the U.S. National Oceanic and Atmospheric Administration that launched in February 2015 — hovers 1 million miles (1.6 million kilometers) from Earth, capturing a constant view of the day-lit side of the planet.

The satellite snaps a series of photos of the illuminated Earth every day, providing data about the planet's vegetation and atmosphere, among other things.

At 11:50 p.m. EDT on July 4 (0350 GMT on July 5), the moon began its second photobomb of Earth, passing over the Indian and Pacific oceans over the course of 3.5 hours. In the previous lunar passage, captured on July 16, 2015, the moon crossed over the Pacific Ocean near North America.

Both DSCOVR videos revealed the far side of the moon, often erroneously called the "dark side" (it is clearly illuminated by the sun in DSCOVR's photos). Because the moon is "tidally locked," with one side permanently facing Earth, the lunar farside remains unseen from Earth without the help of satellites.

DSCOVR's orbit changes constantly from an ellipse to a circle and back, intersecting the path of the moon about four times a year. During some of these crossings, the moon is on a different part of its orbit, so the satellite can capture only one or two snapshots of the lunar passage across the face of the planet each year.