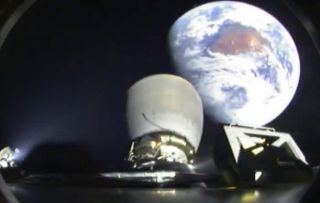 On Feb. 11, 2015, Elon Musk of SpaceX tweeted this photo, showing the Falcon 9 rocket's second stage carrying the DSCOVR satellite to its parking orbit. The Earth shines in the background.
(Image: © Elon Musk (via Twitter))

A SpaceX rocket launching the spaceflight company's first mission to deep space came in for a smooth landing in the ocean after the launch Wednesday (Feb. 11), as another piece of the rocket captured an incredible view of Earth from space.

SpaceX representatives originally wanted to land the first stage of the Falcon 9 rocket that carried the Deep Space Climate Observatory mission (DSCOVR) to space on a drone ship in the Atlantic Ocean, but rough seas thwarted that attempt. Instead, the Falcon 9 came in for an upright landing in the ocean.

"Rocket soft landed in the ocean within 10m of target & nicely vertical! High probability of good droneship landing in non-stormy weather," SpaceX founder Elon Musk said via Twitter Wednesday. Tests like these may help SpaceX eventually create a fleet of reusable rockets that could dramatically reduce the cost of spaceflight, officials have said. [See more images from the DSCOVR mission]

Before coming in for its landing, the Falcon 9 launched DSCOVR on its way to a point in space 1 million miles (1.6 million kilometers) from Earth called Lagrange 1. The spacecraft will monitor space weather and alert scientists of any potentially harmful solar storms heading toward the planet from that distant orbit. The second stage of the Falcon 9 managed to capture an amazing view of Earth from space during the mission.

You can also watch an amazing video of the Falcon 9's sunset launch of DSCOVR.

The $340 million DSCOVR mission will also produce incredible images of Earth from space during its lifetime. An instrument called EPIC (short for Enhanced Polychromatic Imaging Camera) will beam back pictures of the sunlit side of the planet, an instrument idea that was carried over from an earlier iteration of the satellite, then called Triana.

Triana (sometimes referred to as "GoreSat" due to former Vice President Al Gore's support of the program) was originally approved in 1998, but budget woes and political issues got in the way, forcing officials to mothball the project. The mission was reborn as DSCOVR and as a partnership between NASA, the National Oceanic and Atmospheric Administration (NOAA) and the U.S. Air Force.

"It was inspiring to witness the launch of the Deep Space Climate Observatory (DSCOVR)," Gore wrote in a statement posted to his blog after launch. "DSCOVR has embarked on its mission to further our understanding of Earth and enable citizens and scientists alike to better understand the reality of the climate crisis and envision its solutions. DSCOVR will also give us a wonderful opportunity to see the beauty and fragility of our planet and, in doing so, remind us of the duty to protect our only home."