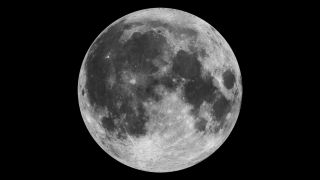 The moon, as seen by the United States' Clementine spacecraft in 1994.
(Image: © NASA)

A glimpse into China's readiness to handle samples from the moon reveals steps to be taken for storage, processing and preparation of the specimens.

The reported candidate landing region for Chang'e 5 is the Rümker region, located in the northern Oceanus Procellarum ("Ocean of Storms"). The area is geologically complex and known for its volcanic activity.

The Chang'e 5 mission has four main parts: an orbiter, ascender, lander and Earth reentry module, which will contain up to 4.4 lbs. (2 kilograms) of lunar surface and subsurface samples.

Related: China on the moon! A history of Chinese lunar missions in pictures

The former Soviet Union successfully executed three robotic lunar sample return missions. Luna 16 returned a small sample (101 grams) from Mare Fecunditatis ("Sea of Fertility") in September of 1970; in February 1972, Luna 20 returned 55 grams of soil from the Apollonius highlands region; and Luna 24 retrieved 170.1 grams of lunar samples from the moon's Mare Crisium ("Sea of Crisis") for return to Earth in August 1976.

The United States brought back much more moon material. The six Apollo missions that touched down on the lunar surface from 1969 to 1972 collected 842 lbs. (382 kg) of lunar samples at different landing sites on the lunar surface, including rocks, core samples, lunar soil and dust.

In a paper that was scheduled to be presented last month at the Lunar and Planetary Science Conference (LPSC), which ended up being cancelled due to concerns about the novel coronavirus, lead author G. L. Zhang from the National Astronomical Observatory, Chinese Academy of Sciences, details the main tasks of the Ground Research Application System (GRAS) of the country's lunar exploration project.

These tasks include: receiving lunar samples from the spacecraft system; establishing special facilities and laboratories for permanent local storage of samples and backup storage at another location; and preparation and preprocessing of lunar samples.

According to the requirements of the mission, GRAS formed a complete lunar sample preprocessing, storage and preparation plan.

A detailed pipeline for this plan is discussed in the LPSC paper.

"All the tools that contact with lunar sample are made of stainless steel, Teflon, quartz glass or materials of known composition to strictly control the factors that will affect subsequent scientific analysis. The water and oxygen content in the glove box, filled with pure [nitrogen], will be strictly monitored to prevent the lunar samples from Earth pollution," the LPSC paper notes.

"They seem to be taking a very similar approach to how we have (and continue to) process and curate Apollo samples (and other astromaterials in our collection)," said Ryan Zeigler, NASA's Apollo Sample Curator and manager of the Astromaterials Acquisition and Curation Office of the Astromaterials Research and Exploration Science Division at NASA's Johnson Space Center in Houston.

"There are a few minor differences, but that is to be expected since each mission has unique characteristics," Zeigler told Inside Outer Space.

The Chinese are clearly taking seriously the handling, storage and preliminary examination of a potential set of new lunar samples. The technology described is in many ways similar to the technology in the NASA Lunar Sample Laboratory, noted Carlton Allen, a former NASA Astromaterials Curator. (He is now retired.)

"The use of a nitrogen atmosphere for preparation, subdivision and storage has proven both necessary and sufficient over 50 years of lunar curation at NASA," Allen said.

Glovebox photos show that the nitrogen is maintained at positive pressure with respect to the laboratory atmosphere, which has proven important for contamination control.  The importance of restricting the materials that come into contact with the samples, another important aspect of contamination control, is also recognized.

The technology described by G. L. Zhang and colleagues "has the potential to make these future lunar samples directly comparable to Apollo and Luna samples, which could significantly increase the value of each sample set," Allen said.

Leonard David is the author of the book "Moon Rush: The New Space Race," published by National Geographic in May 2019. A longtime writer for Space.com, David has been reporting on the space industry for more than five decades. Follow us on Twitter @Spacedotcom or Facebook.