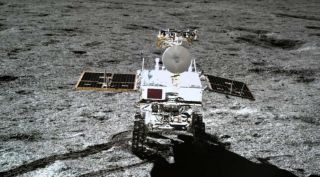 HELSINKI — The Chang'e-4 lander and rover entered sleep mode Monday (Feb. 11) in preparation for a second lunar nighttime on the far side of the moon.

The solar-powered spacecraft, which landed in the eastern section of the Von Kármán crater on Jan. 3, powered down at 6 a.m. Eastern Monday, according to a release from the China Lunar Exploration Program in preparation for sunset around 24 hours later.

The Yutu-2 rover has accumulated 120 meters of driving on the lunar surface, surpassing the 114 meters of roving managed by the 2013 Chang'e-3 mission rover Yutu ("Jade Rabbit") before it became immobilized in its second lunar daytime.

Yutu-2 has been upgraded for improved reliability to address the issue with the first Yutu rover. The new rover has a design life of three months, after which a joint Netherlands-China low frequency radio astronomy instrument (NCLE) aboard the Queqiao ("Magpie Bridge") Chang'e-4 relay satellite will begin operations.

Queqiao launched in May 2018 to Earth-Moon Lagrange Point 2, but NCLE, as a precaution against interference with the communications relay function of the satellite, has not yet been deployed. If still functional, the Yutu-2 will continue to operate and rove after NCLE is switched on.

Yutu-2 resumed activities on Jan. 29 after a first lunar night on the surface, before entering a precautionary standby mode while the sun was high over the landing site between Feb. 4 and Feb. 8.

The rover's science payloads — the Lunar Penetrating Radar, Visible and Near-Infrared Imaging Spectrometer, Advanced Small Analyzer for Neutrals, and Panoramic Camera — were reported to be operating nominally and with good data transmission.

The Yutu-2 rover and lander will resume science and exploration activities on Feb. 28 and March 1, respectively, according to the release, with the rover needing to unfold solar panels and dissipate heat.

The previous lunar night saw the Chang'e-4 lander record a temperature low of -190 degrees Celsius (-310 Fahrenheit), with measurements made possible by a Russian-developed radioisotope thermoelectric generator which also acts as a prototype for future deep-space exploration.

Official updates on the progress of the mission had been sparse during the second lunar day of operations, though some new images and footage were released ahead of the Chinese New Year holiday, which ran from Feb. 4 to Feb. 10.

The NASA Lunar Reconnaissance Orbiter passed 330 kilometers east of the landing site on Jan. 30, returning an oblique image of the Von Kármán crater and the Chang'e-4 lander, before later also isolating the rover within the image.

A more vertical view of the spacecraft and landing site was likely imaged in a following orbit using LRO's LAMP instrument. That view could be released, along with any significant findings on how lunar dust is ejected upwards during a spacecraft's landing, during the 56th session of the Scientific and Technology Subcommittee meeting of the UN Committee on the Peaceful Uses of Outer Space, which opened Monday in Vienna, Austria, and runs to Feb. 22.

Another component of the Chang'e-4 mission, the 45-kilogram Longjiang-2 microsatellite launched with Queqiao and operating in an elliptical lunar orbit, last week returned new images from a student-developed camera.

One image downloaded and released by amateur radio enthusiasts featured the full disc of the far side of the moon, and the more distant Earth in the same shot.

In late January, a maneuver was carried out to reduce the perilune of the satellite, which is expected to result in Longjiang-2 impacting the moon around August to remove any threat to future missions, according to a source close to the project.