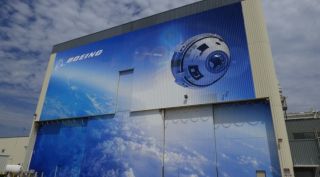 Boeing, which is already assembling its CST-100 Starliner commercial crew vehicle at the Kennedy space Center, said June 19 it will move the headquarters of its space division to Florida's Space Coast.
(Image: © SpaceNews Photo)

WASHINGTON — Boeing announced June 19 it will move the headquarters of its space division from the Washington, DC area to Florida as a number of its major programs shift from development to operations.

Dennis Muilenburg, chief executive and president of Boeing, announced the headquarters move from Arlington, Virginia, to Titusville, Florida, in a speech at the John F. Kennedy Library in Boston that kicked off a day-long "Space Summit" at the library commemorating the 50th anniversary of the Apollo 11 mission.

"This is a major transition for us as a company as we set up our headquarters in the Florida Space Coast region," he said. "The momentum and energy along the Florida Space Coast, the amount of investment that is happening, is extraordinary. So we're honored to be part of that energy and momentum, and we hope to add to it with this relocation."

The shift involves the Space and Launch division of Boeing's Defense, Space and Security business unit, currently headquartered near the Pentagon. Boeing spokesman Dan Beck told SpaceNews the move will involve only a "small number" of people, led by current Space and Launch Senior Vice President Jim Chilton, his executive team and support staff. No changes are planned to the company's space operations in other locations. The move is scheduled to be completed by the end of the year.

"Expanding our Boeing presence on the Space Coast brings tremendous value for our commercial and government space programs through focused leadership, strategic investment, customer proximity and additional contributions to the vitality of the region," Chilton said in a Boeing statement.

In his speech and later question-and-answer session at the library, Muilenburg cited as a reason for the move the progress the company was making on several programs, including the CST-100 Starliner commercial crew vehicle, Space Launch System and the Phantom Express experimental spaceplane being developed for DARPA that may launch from the Kennedy Space Center.

"Now, as we see all of these programs transitioning from development to operation, now is the right time for us to make that transition," he said of the headquarters move.

Much of Boeing's commercial crew work has been based at NASA's Kennedy Space Center, using a former shuttle-era hangar that the company converted into an assembly facility for the spacecraft. Muilenburg said the first, uncrewed flight of the Starliner will take place later this summer with a crewed test flight to follow "before the end of the year."

He also said that the Space Launch System, for which Boeing is the prime contractor, remains on schedule for a first launch next year on an uncrewed test flight. He did not address a Government Accountability Office report, published June 19, that warned that first launch could slip to the middle of 2021 as the vehicle's cost continues to grow.

Muilenburg offered an optimistic assessment of the future of commercial spaceflight in general, with the company's Starliner vehicle playing a key role. He said the company would make available one of the five seats on the spacecraft for commercial customers, with the other four used for transporting NASA and other government astronauts to and from the station. He said Starliner could fly as often as six missions a year to the ISS and other low Earth orbit destinations.

"We expect to see a viable space ecosystem, low Earth orbit ecosystem, evolve over the next decade," he said. "This is a big point of transition for The Boeing Company, another defining moment for us."