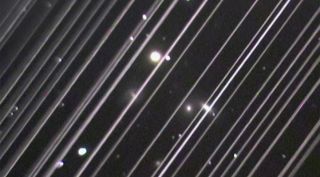 An image released by the IAU June 3 shows trails made by dozens of Starlink satellites as they passed through the field of view of a telescope during an observation shortly after launch. The IAU noted in its statement that the density and brightness of the satellites in this image is not representative of their appearance in their final orbital configuration.
(Image: © Victoria Girgis/Lowell Observatory)

WASHINGTON — Despite complaints by individual astronomers and astronomical organizations, legal experts say there is little they can do under existing federal law and regulations to halt the deployment of SpaceX's Starlink satellites.

SpaceX launched the first set of 60 Starlink satellites May 23. The next evening, amateur astronomers noticed them passing in a closely-bunched train, bright enough to be easily seen by the naked eye. The satellites have subsequently spread out in the sky and raised their altitude, becoming harder to see but occasionally flaring to brighter magnitudes.

The initial appearance has alarmed many professional astronomers, who are concerned that the full Starlink constellation — SpaceX has licenses from the Federal Communications Commission for up to about 12,000 satellites — could interfere with groundbased astronomy. In some scenarios, hundreds of satellites could be visible in the sky at any given time, making it more likely one will cross the field of view of a telescope and disrupt an observation.

"The rapid increase in the number of satellite groups poses an emerging threat to the natural nighttime environment and our heritage of dark skies," said the International Dark-Sky Association, a group devoted primarily to addressing terrestrial light pollution threats to astronomy, in a May 29 statement.

That statement also included an anecdote from James Lowenthal, a professor of astronomy at Smith College, who observed the initial Starlink train while on an outing with students. Seeing the satellites, he said, was a "shocking and devastating sight."

The International Astronomical Union (IAU), an organization best known for overseeing nomenclature for celestial bodies, also weighed in, noting the potential for satellite constellations such as Starlink to interfere with both optical and radio astronomy.

"Satellite constellations can pose a significant or debilitating threat to important existing and future astronomical infrastructures, and we urge their designers and deployers as well as policy-makers to work with the astronomical community in a concerted effort to analyze and understand the impact of satellite constellations," the IAU said in a June 3 statement. "We also urge appropriate agencies to devise a regulatory framework to mitigate or eliminate the detrimental impacts on scientific exploration as soon as practical."

However, currently in the United States there are no regulations that apply to the appearance of satellites in the night sky, beyond a prohibition in federal law against "obtrusive space advertising," defined as "advertising in outer space that is capable of being recognized by a human being on the surface of the Earth without the aid of a telescope or other technological device." Simply being able to see a satellite from the ground, legal experts say, does not qualify as obtrusive space advertising.

Michael Listner of Space Law and Policy Solutions said in a June 3 interview that the only legal recourse for astronomers would be to file a case in federal court, including seeking a temporary injunction to block future launches. He was skeptical, though, that such a case would be successful, since damages to astronomers from constellations like Starlink are only "speculative" at this time.

Others noted that astronomers missed opportunities to comment earlier, such as when the FCC was considering SpaceX's original application for the Starlink constellation or its more recent modification seeking approval to operate some satellites at a lower altitude. The public docket for that application, on the FCC's website, primarily consists of letters and petitions from other satellite operators concerned about radiofrequency interference.

The only comment from astronomers came from the National Radio Astronomy Observatory (NRAO), which filed a letter in February 2018 noting that efforts between SpaceX and NRAO to coordinate frequency usage "trailed off inconclusively" in mid-2017.

The NRAO, in a May 31 statement, said it and the Green Bank Observatory in West Virginia had been working with SpaceX about radiofrequency interference issues. "These discussions have been fruitful and are providing valuable guidelines that could be considered by other such systems as well," the NRAO stated. "To date, SpaceX has demonstrated their respect for our concerns and their support for astronomy."

SpaceX executives said they're aware of concerns by astronomers about the effects Starlink satellites could have on their observations. Elon Musk, founder and chief executive of the company, said in a May 27 tweet that he had asked engineers to look into "albedo reduction" of future Starlink satellites that would make them reflect less sunlight and thus appear dimmer.

"If we need to tweak sat orientation to minimize solar reflection during critical astronomical experiments, that's easily done," he said in another tweet. He didn't define what would be considered a "critical" observation.

Gwynne Shotwell, president of SpaceX, said at a May 29 symposium at the Massachusetts Institute of Technology that the company was still trying to understand what causes the satellites to often appear bright while "working on ways to make that less severe," according to one attendee.