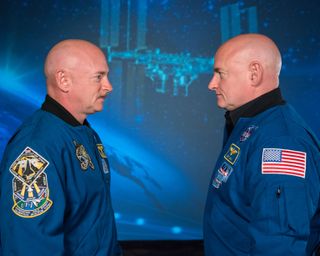 Scott and Mark Kelly at a press event in 2015 before Scott's nearly yearlong stay on the International Space Station. Researchers carefully tracked both twins over the course of the mission and afterward to observe how Scott's body and capabilities changed due to spaceflight.
(Image: © NASA/Robert Markowitz)

A new tool developed by researchers at Northwestern University shows spaceflight consistently alters the diversity of bacteria in astronauts' guts.

The tool, called Similarity Test for Accordant and Reproducible Microbiome Abundance Patterns (STARMAPS), was used to analyze data from various experiments, including samples collected from mice sent to the space shuttle and International Space Station, NASA's Twins Study and Earth-based studies on the effects of radiation on the gut.

A wide array of data suggests that mice on the space shuttle and space station underwent changes similar to those that astronaut Scott Kelly experienced during his 11 months in space. The new study also shows that these microbiome changes are most likely caused by microgravity, rather than by radiation, according to a statement from Northwestern University in Illinois.

Related: Just Like Home: Space Station Has Same Microbes As Your House

"Radiation definitely has an effect on the gut microbiome," Martha Vitaterna, a neurobiologist at Northwestern University and lead author of the study, said in the statement. "But those effects do not look like what we saw in spaceflight."

The study looked at mouse samples from the final American space shuttle mission, STS-135, which launched in 2011, as well as samples from seven different groups of mice that were sent to the space station as part of NASA's Rodent Research mission, which began in 2014.

Microbiome changes observed in the groups of mice studied on the space station were compared to a ground control group, which lived in an environment that simulates spaceflight habitats. The study also included data from a baseline group and a laboratory group, which were housed in a conventional mouse facility.

In addition, the researchers analyzed data from NASA's Twins Study, which compared physiological changes in astronaut Scott Kelly to his Earth-bound twin, Mark, who was also an astronaut.

Although research has shown that spaceflight causes significant changes in the diversity of bacteria in the gut microbiome, the exact cause of the changes wasn't entirely clear.

"There wasn't a statistical approach for doing this work," Vitaterna said in the statement. "The tools didn't exist, so we invented them. It's a classic case of how necessity is the mother of invention."

Using STARMAPS, researchers were able to identify patterns in which different types of bacteria become more or less abundant under various conditions. Thus, the new tool offers a much more comprehensive view of how spaceflight affects astronauts' gut microbiomes.

"If we are going to send humans to Mars or on long missions to the moon, it is essential to understand the effects of long-term exposure of the space environment on us — and on the trillions of bacteria traveling with us," Fred Turek, co-author of the study who researches sleep at Northwestern, said in the statement.

However, there were slight differences in the microbiome changes observed between the spaceflight and ground control mice groups, which indicates habitat plays a key role.

Previous studies on the effects of radiation on the mouse microbiome do not show the same pattern of microbiome changes. Therefore, the researchers believe microgravity may have a distinct effect on the gut microbiome, though further research is needed, according to the statement.

"Understanding the factors that can reduce this kind of microbiome change would be useful information to have — for offsetting the effects of stress on Earth," Vitaterna said in the statement. "Understanding what genetic factors contribute to differences in bacterial strains will be useful for developing countermeasures that can protect your microbiome during stressful periods."

Their findings were published August 9 in the journal Microbiome.