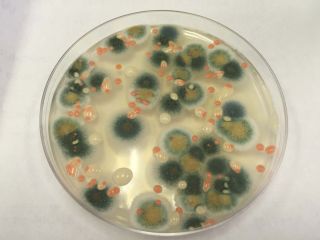 An investigation of bacteria and fungi taken from the space station reveals microorganisms similar to those found in busy public spaces on Earth.
(Image: © NASA)

Just like on Earth, there is a robust population of bacteria and fungi on the International Space Station (ISS) — and a new study catalogues its exact composition.

Most of the microbes are associated with humans, particularly the bacteria Staphylococcus (26% of total bacteria isolated), Pantoea (23%) and Bacillus (11%), according to a statement on the new work. Other organisms come from specific parts of humans, such as Staphylococcus aureus (10%), which is usually found in human nasal passages and skin. Another example is Enterobacter, whose percentage was not specified in the release, which is found in the human gastrointestinal tract.

While it sounds like a gross combination, the scientists noted in the statement that similar bacteria are found in mundane Earth environments such as offices, gyms and hospitals, so the space station is similar to these other "built environments" frequented by humans.

It's unclear if bacteria that sometimes cause disease on Earth, such as Staphylococcus aureus and Enterobacter, could cause disease in ISS astronauts, researchers said in the statement, because that depends on things such as how these organisms function in microgravity and how healthy the astronaut is to start. (In general, people selected for space are in great health, and work to maintain their fitness in space in exercise periods spanning 2 hours a day.)

"Specific microbes in indoor spaces on Earth have been shown to impact human health, Kasthuri Venkateswaran, a senior research scientist at NASA's Jet Propulsion Laboratory and a co-author of the paper, said in the statement. "This is even more important for astronauts during spaceflight, as they have altered immunity and do not have access to the sophisticated medical interventions available on Earth."

"In light of possible future long-duration missions," Venkateswaran said, "it is important to identify the types of microorganisms that can accumulate in the unique, closed environments associated with spaceflight, how long they survive and their impact on human health and spacecraft infrastructure."

Astronauts collected the samples during three flights spanning 14 months, a time span that allowed the researchers to see how the microbial and fungal populations changed over locations and during time. They came from eight locations on the ISS, including the dining table, toilet, exercise equipment, a viewing window and sleeping quarters.

"The authors found that while fungal communities were stable, microbial communities were similar across locations but changed over time," researchers said in the statement. "Samples taken during the second flight mission had higher microbial diversity than samples collected during the first and third missions. The authors suggest that these temporal differences may be due to the different astronauts on board the ISS."

The new research was led by Aleksandra Checinska Sielaff, who has affiliations at both NASA's Jet Propulsion Laboratory and Washington State University. The work was detailed April 8 in the journal Microbiome.