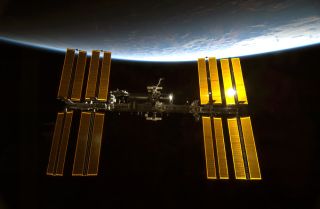 This image from a NASA space shuttle mission shows the International Space Station in orbit. The space station is the size of a football field and home to six astronauts.
(Image: © NASA)

These findings, as well as research to help reduce these risks, are part of the ongoing projects at the International Space Station that use microgravity to reveal secrets about microbes.

"We seek to unveil novel cellular and molecular mechanisms related to infectious disease progression that cannot be observed here on Earth, and to translate our findings to novel strategies for treatment and prevention," said microbiologist Cheryl Nickerson at Arizona State University's Biodesign Institute. Nickerson detailed these findings on Monday (Feb. 18) at the annual meeting of the American Association for Advancement of Science in Boston.

In space, researchers encounter greatly reduced levels of gravity, often erroneously referred to as zero gravity. This near-weightlessness can have a number of abnormal effects on astronauts, such as causing muscle and bone loss.

Although microgravity can distort normal biology, conventional procedures for studying microbes on Earth can cause their own distortions.

Experiments on Earth often involve whirling cells around to keep them from settling downward in a clump due to gravity. However, the physical force generated by the movement of fluid over cell surfaces causes great changes to the way cells act. This property, known as fluid shear, influences a broad range of cell behaviors, and the shear that experiments on Earth introduce could twist results. [6 Coolest Space Shuttle Experiments]

In microgravity, researchers do not need to constantly disturb cells to keep them from clumping, as gravity is not pulling down on the cells to any significant degree. As such, experiments in microgravity can attain low fluid shear, and thus better reflect what normally happens with germs and cells inside bodies, Nickerson explained.

For example, the most common sites of human infection are the mucosal, gastrointestinal and urogenital tracts, where fluid shear is typically low.

In an earlier series of NASA space shuttle and ground-based experiments, Nickerson and her colleagues discovered that spaceflight actually boosted the virulence, or disease-causing potential, of the food-borne germ Salmonella.

"Does microgravity alter how Salmonella behaves? You bet it does, in a profound and novel way," Nickerson said.

"By studying the effect of spaceflight on the disease-causing potential of major pathogens like Salmonella, we may be able to provide insight into infectious disease mechanisms that cannot be attained using traditional experimental approaches on Earth, where gravity can mask key cellular responses," Nickerson said.

These findings are of special concern for astronaut health during extended spaceflight missions. Space travel already weakens astronaut immunity, and these findings reveal that astronauts may have to further deal with the threat of disease-causing microbes that have boosted infectious abilities.

Microgravity apparently causes many genes linked with Salmonella's virulence to switch on and off in ways not seen in Earth-based labs. The same appears to happen with bacterialgenes linked to resistance against stress and to the formation of fortress-like structures known as biofilms. A better understanding of which genes spaceflight alters could help design therapies to fight or prevent infection, helping protect people both in space and on Earth.

"We need to outpace infectious disease because we're losing the fight to the pathogens," Nickerson told SPACE.com.

Microgravity research could also help lead to novel vaccines. In a recent spaceflight experiment aboard space shuttle mission STS-135 (the last-ever shuttle flight), researchers brought along a genetically modified Salmonella-based vaccine designed to protect against pneumococcal pneumonia. Analysis of the effects of microgravity on the behavior of the vaccine could help reveal how to genetically modify it to improve it.

"Recognizing that the spaceflight environment imparts a unique signal capable of modifying Salmonella virulence, we will use this same principle in an effort to enhance the protective immune response of the recombinant, attenuated Salmonella vaccine strain," Nickerson said.

Experiments aboard the space station are now permitting microbial studies over prolonged time frames, ones not available during shuttle-based experiments. These studies in space are carried out in conjunction with simultaneous analyses on Earth using the same hardware as those in orbit, so researchers can compare the behavior of bacterial cells under normal Earth gravity. [Top 10 Mysterious Diseases]

In addition, researchers hope to simulate microgravity using machines such as rotating wall vessel bioreactors, which grow cells in ways that mimic how cells float in outer space. Such research helped confirm that a protein called Hfq plays a key role in the Salmonella response to spaceflight conditions. Still, these bioreactors can only replicate about 70 percent of the effects seen in spaceflight.

Nickerson was first to study the effects of spaceflight on pathogen virulence and the first to profile the infection process in human cells in spaceflight. Her PHOENIX experiment, the capsule will mark the first time a whole, living organism will be infected with a germ, and simultaneously monitored in real time during the infection process under microgravity conditions. PHOENIX will fly on the SpaceX Dragon capsule travelling to the space station later this year, and will infect a nematode worm with Salmonella.

"Nematodes are wonderful for studying Salmonella. Tthey're basically one, long gastrointestinal tract from one end to the other," Nickerson said.

The significance of the results Nickerson and her colleagues have uncovered extends to more than just Salmonella. The researchers' experiments on the protein Hfq show that it apparently serves as a key regulator of gene responses to spaceflight conditions across a number of other bacterial species, including Pseudomonas aeruginosa, a common hospital-acquired infection.

"It is exciting to me that our work to discover how to keep astronauts healthy during spaceflight may translate into novel ways to prevent infectious diseases here on Earth," Nickerson said.