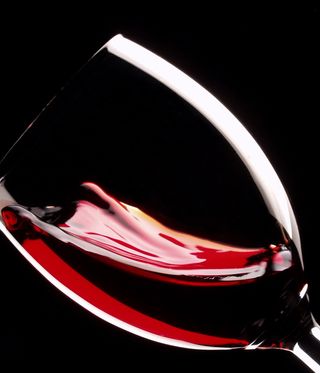 A chemical in red wine could prove beneficial in fighting the health effects of weightlessness.
(Image: © Dreamstime)

While the astronauts on NASA's final shuttle mission right now don't have a sip of alcohol around, new research suggests it actually might be good for their health.

The study found that red wine could help prevent the ill effects of prolonged weightlessness on the human body.

An ingredient in red wine, called resveratrol, has shown promise protecting against the bone density loss and insulin resistance that can be side effects of flying in space, researchers said. The finding is based on a study of rats held upside down by their hind limbs and tails to simulate weightlessness. The rats fed resveratrol did not develop the adverse symptoms of the other group.

"For the first time, we report a simple countermeasure that prevents the deleterious adaptations of the major physiological functions affected by mechanical unloading," the researchers, led by Iman Momken of the University of Strasbourg in France, wrote in a paper reporting their findings in the journal of the Federation of American Societies for Experimental Biology.

Resveratrol "could thus be envisaged as a nutritional countermeasure for spaceflight but remains to be tested in humans," the scientists wrote. [Space Food Photos: What Astronauts Eat in Orbit]

Not just for space

The researchers say their findings could apply not just to astronauts but to sedentary people on the ground, too, who can experience some of these problems simply from not moving around enough.

"There are overwhelming data showing that the human body needs physical activity, but for some of us, getting that activity isn't easy," Dr. Gerald Weissmann, editor-in-chief of the journal, said in a statement.

"A low gravity environment makes it nearly impossible for astronauts. For the earthbound, barriers to physical activity are equally challenging, whether they be disease, injury, or a desk job. Resveratrol may not be a substitute for exercise, but it could slow deterioration until someone can get moving again." [Is Wine Really Good For You?]

Will alcohol in space fly with NASA?

But despite the health benefits, NASA may be a tough sell on giving astronauts wine while on duty.NASA regulations forbid astronauts to drink alcohol during spaceflights or within 12 hours of launch time.

The prelaunch policy, initially an unofficial guideline adapted from its T-38 jet flight rules, was officially adopted for human spaceflight in 2007, when an independent health panel reported two anecdotal incidents of astronauts drinking before launch. A NASA investigation later found no evidence to support that the incidents had ever occurred, and an anonymous survey of astronauts and flight surgeons conducted a year later also found no indications that any astronauts consumed alcolhol, or seen others do so, before a launch.

Four veteran spaceflyers are currently flying on NASA's 135th and last space shuttle missionever. The agency is planning to retire its three shuttle orbiters to embark on a new program of deep space human exploration to asteroids and Mars. [Photos: NASA's Last Shuttle Mission in Pictures]

While NASA has found that strenuous exercise on special machines on the shuttle and International Space Station help mitigate the worst effects of weightlessness so far, missions to more distant bodies would require humans to be in space for longer periods of time.

"Each of these adaptations could turn to serious health deterioration during the long-term spaceflight needed for planetary exploration," Momken and colleagues wrote.

In those cases, a supplement of resveratrol — or, you know, a glass of wine — just might prove beneficial.