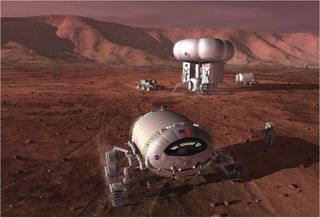 The road to Mars is paved with peril.

Astronauts on Red Planet missions will have to contend with deep-space radiation, the effects of microgravity and the stress of confinement and isolation, all at the same time and for a long, continuous stretch. It currently takes a minimum of six months to get to Mars, after all, and just as long to get back.

And crewmembers will have to make it through this gantlet in good nick, both physiologically and psychologically.

The spacecraft these astronauts launch aboard "will have to provide them everything they need for basic survival, but even more than that, because we expect them to be capable of doing a job — a job that has cognitive demands, a job that has physical demands," Jennifer Fogarty, the chief scientist with NASA's Human Research Program (HRP), said earlier this month during a presentation with the agency's Future In-Space Operations working group.

The HRP is tasked with characterizing the effects of spaceflight on astronauts and developing mitigation strategies. The program recognizes five classes of "stressor" that can significantly affect human health and performance on deep-space missions, Fogarty said. These are altered gravity fields, hostile closed environments, radiation, isolation/confinement, and distance from Earth (which means that help is very far away).

HRP scientists and other researchers around the world are trying to get a handle on all of these stressors, by performing experiments here on Earth and carefully monitoring the mental and physical health of astronauts living on the International Space Station (ISS).

The long-term goal of such work is to help enable crewed missions to Mars, which NASA wants to pull off before the end of the 2030s. Indeed, a few years ago, NASA astronaut Scott Kelly and cosmonaut Mikhail Kornienko stayed aboard the ISS for 11 months — about twice as long as the usual stint — to help researchers gauge the impact of very long space missions, such as the roundtrip journey to Mars.

It's tough to accurately characterize the toll that such a voyage will take on an astronaut, however. That's because the cumulative effect of the spaceflight stressors might be additive or synergistic, Fogarty said, and putting all of the hazards together in an experimental setting is nearly impossible.

For example, scientists perform radiation studies on lab animals here on Earth. But microgravity isn't part of that experimental picture, and adding it to the mix isn't feasible at the moment. (The ISS cannot provide deep-space radiation data, because it orbits within Earth's protective magnetosphere. And installing radiation-emitting gear aboard the orbiting lab doesn't seem like a great idea.)

Some of the stressors are more concerning than others. For example, researchers and NASA officials have repeatedly cited radiation as one of the biggest Mars-mission hazards.

High radiation exposure increases astronauts' risk of developing cancer later in life, but there are more immediate concerns as well. For instance, a recent study determined that crewmembers on a Red Planet mission will likely receive cumulative doses high enough to damage their central nervous systems. Astronauts' moods, memory and learning ability may be compromised as a result, the study found.

SANS "right now in low Earth orbit is very, very manageable and recoverable, but we don't know the system well enough to predict whether it will remain that way for something like an exploration mission," Fogarty said. "So, this is one of our highest-priority physiological areas that we're studying right now."

The moon as a proving ground

NASA isn't planning to go straight to Mars. The agency aims to land two astronauts near the lunar south pole by 2024, then establish a long-term, sustainable presence on and around the moon shortly thereafter.

Indeed, the main goal of these activities, which NASA will conduct via a program called Artemis, is to learn the skills and techniques needed to send astronauts to Mars, agency officials have said.

One of Artemis' key pieces of infrastructure is a small moon-orbiting space station called the Gateway, which will serve as a hub for surface activities. For example, landers, both robotic and crewed, will descend toward the lunar surface from Gateway, and astronauts aboard the outpost will likely operate rovers from up there as well, NASA officials have said.

A great deal of research will be conducted on Gateway as well, and much of it will investigate astronauts' health and performance in a true deep-space environment. Fogarty mentioned one research strategy that may be particularly useful to planners mapping out the path to Mars — studying small samples of human tissue aboard the moon-orbiting outpost.

Such work will help researchers get around one of the biggest issues affecting studies that use rodents and other non-human animals as model organisms, Fogarty said — that of "translatability."

"How do we bridge the difference between a rat or a mouse and a human? Because it's not directly applicable, and that's plaguing terrestrial medicine and research as well," she said.

"But with the invention of, and the continued validation of, organs and tissue on a chip — those are actual human tissues, and you can connect them, and essentially you can recapitulate very sophisticated aspects of a human using these chips," Fogarty added. "I think we can make significant progress understanding the complex environment using the chip scenario as a model organism to interpret really where we're going with the human limitation."