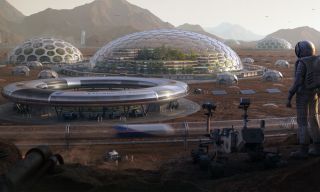 Max Rymsha, from the Ukraine, was one of the winners in the HP Mars Home Planet Rendering Challenge. They won for their piece "Between the Red Mountains" as part of the Rendering challenge.
(Image: © Courtesy of HP, Inc.)

A recent contest challenged participants to create utopian designs of future human Mars settlements, and their creations are stunning.

In the HP Mars Home Planet Rendering Challenge, over 87,000 people from all over the world flexed their creative muscles to design the perfect colony on the Red Planet. Last summer, when HP launched the challenge, the participants started working on their designs, and the winners were announced on Aug. 14.

This challenge wasn't just about creating a pretty, futuristic-looking, idealistic Martian colony. Indeed, the designs also had to show how the settlements would support 1 million colonists. The surface of the Red Planet is harsh, with an extremely thin atmosphere, intense radiation and dust storms that occasionally envelop the planet. [Mars Ice Home: A Red Planet Colony Concept in Pictures]

The participants' designs were judged on originality, creativity, rendering quality and Mars physics (or how the design would realistically work on the actual Martian surface), HP included in a statement. The designs must take into account atmospheric conditions, gravity, the soil, the surface terrain, radiation, drinking water, and air, the statement added.

You can learn more about the challenge here.

Check out some of the winning designs: