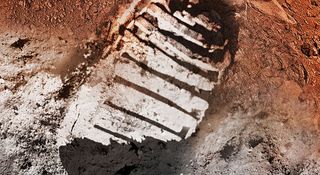 An artist's depiction of the iconic Apollo 11 bootprint transported to Mars.
(Image: © NASA)

Americans are more willing to pay for a mission that would land an astronaut on Mars, a Gallup poll conducted in the lead-up to the 50th anniversary of the Apollo moon landing has found.

The poll asked 1,018 adults living in the U.S. over the course of two weeks at the end of June if they would support the government setting aside money for a human mission to the Red Planet. Gallup had asked the same question just after the return of Apollo 11, in late July 1969, and again in the lead-up to the 30th anniversary of the mission, in July 1999.

This year, unlike in the two previous years, the polling group found that a slight majority would approve of such a funding appropriation, with 53% of the respondents in favor, 46% opposed and 1% without an opinion in a poll with a sampling error of +/-4%.

On each occasion, the pollsters asked people: "There has been much discussion about attempting to land an astronaut on the planet Mars. How would you feel about such an attempt — would you favor or oppose the United States setting aside money for such a project?"

When Gallup first asked the question, while the Apollo 11 astronauts were still in quarantine upon their return from the moon, the Americans they called were not particularly enthusiastic about the prospect of paying for another massive mission: 39% were in favor of funding a Mars mission, 53% were opposed and 8% said they had no opinion. (The total number of respondents and the sampling error aren't available for the 1969 and 1999 iterations of the survey).

The budget of the Apollo program itself never polled particularly well, either — the only time a majority of surveyed Americans believed the program was worth the money was in 1969, and even then support was lukewarm at just 53%. Since 1965, space exploration in general has fared well in polls when surveys don't mention the costs of such programs, but still struggle when questions are framed around money.

By party, both Republicans and Democrats were split 55% in favor, 44% opposed, with slightly lower support among independent voters. Ideological conservatives were more evenly split, at 51% in favor, 48% opposed, with support increasing slightly among moderates and more substantially, to 57%, among liberals.

Gallup did not republish the breakdowns of earlier surveys on the question, but in a statement published with the new survey, the polling company said that since 1999, support for funding a human Mars mission has increased substantially among those older than 50 and among Democrats. When that survey was conducted, President Bill Clinton was inclined to keep humans in Earth orbit and let robots do the work at Mars.

NASA is currently focused on human missions to the moon — the first since 1972 — as a steppingstone to sending such missions to Mars. NASA's Artemis program is designed to return humans to the moon within five years to kick off that agenda. But even if that program goes smoothly, Red Planet missions are still more than a decade, and quite a lot of money, ahead.