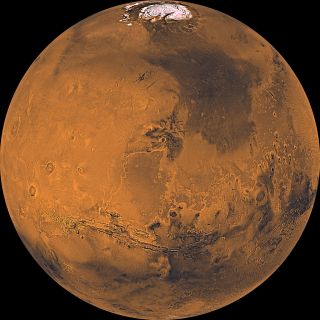 Transforming Mars into a life-friendly world doesn't have to be a herculean planet-wide effort.

Humanity could make patches of the Red Planet habitable relatively cheaply and efficiently by placing thin layers of silica aerogel on or above the Martian surface, a new study suggests. The insulating aerogel would warm the ground enough to melt water ice and would also block harmful ultraviolet (UV) radiation, potentially creating an environment where plants and other photosynthetic life could flourish.

And we could start doing this relatively soon, study team members said.

"We wanted to think about something that's achievable on a decadal time scale rather than something that would be centuries in the future — or perhaps never, depending on human capabilities," lead author Robin Wordsworth, an associate professor of environmental science and engineering at Harvard University, told Space.com.

The Martian surface was eminently habitable in the ancient past, featuring lakes, rivers and even a huge ocean. But things changed dramatically after the planet lost its global magnetic field about 4 billion years ago.

Charged particles from the sun began stripping away Mars' once-thick atmosphere, eventually reducing it to a thin sliver that cannot keep much heat in or UV radiation out. The surface became extremely cold and dry as a result, leaving subterranean aquifers as perhaps the only potential abodes for Earth-like life. (And some researchers do think there's a decent chance the Martian underground supports microbial life today.)

Many discussions about making the Martian surface more hospitable focus on restoring that atmosphere to its former glory — beefing it up by vaporizing huge amounts of water ice and frozen carbon dioxide, for example. But such "terraforming" efforts would be extremely difficult, expensive and time-consuming, as Wordsworth referenced above.

He and his colleagues may have found an alternate path. They were inspired by observations of dark spots in the carbon-dioxide ice caps at the Martian poles, Wordsworth said. These spots are thought to result from a "solid-state greenhouse effect" — sunlight gets absorbed into, and warms, the interior of translucent snow and ice, melting the stuff.

Wordsworth and his team set out to achieve a similar effect with silica aerogels, which are composed of silica clusters connected into networks on the nanoscale. This material, which is more than 97% air by volume, is used widely as an insulator here on Earth and beyond. Silica aerogels are common features of passively heated buildings, for example, and thin layers of the stuff helped keep NASA's Spirit and Opportunity Mars rovers warm during frigid Red Planet nights.

The researchers subjected silica aerogels to Martian conditions in the laboratory, hitting the material with the same amount of solar energy that reaches the Red Planet's surface. They found that an aerogel layer just 0.8 inches to 1.2 inches thick (2 to 3 centimeters) can boost the temperature of the ground beneath it by a whopping 90 degrees Fahrenheit (50 degrees Celsius). That's enough to melt subsurface ice, and keep it melted, to a depth of several meters year-round on Mars. And silica aerogels block UV light, so they would also shield anything under them from harmful radiation, team members said.

The aerogel could be placed directly on the planet's surface, paving the red dirt like tiles. Or it could be used to build greenhouses, which could host food crops and other plants, Wordsworth said.

"Spreading it over a larger area would make the solid-state greenhouse effect more efficient, as the proportional amount of heat emitted from the sides would be less, but you could still get substantial warming in a greenhouse," Wordsworth told Space.com via email. "Whether you place the layer on or above the surface does not have a huge influence on the basic physics of the effect."

This strategy could likely be employed across a wide swath of Mars, the researchers said. Pretty much anywhere between 45 degrees north latitude and 45 degrees south would get enough sunlight to produce substantial warming. And there are lots of areas within this huge midlatitude band that have abundant near-surface water ice and dependable winds (to blow light-blocking dust off the aerogel).

The new study, which was published online today (July 15) in the journal Nature Astronomy, is just a first step, Wordsworth stressed. If all goes according to plan, step No. 2 will involve testing the aerogel technique at a Mars-analogue locale, such as the Arctic or Chile's Atacama Desert.

There would be additional challenges to address even if such field trials went well. For example, how exactly would a mission deploy the silica aerogel on Mars? Would the stuff be transported from Earth (which would not be terribly expensive, given that silica aerogels are extremely light and commercially available) or fabricated on the Red Planet from locally available materials?

Wordsworth and his team did not address such engineering issues. But, he said, the team doesn't see any showstoppers at this point.

There are also significant ethical considerations. For example, is it right for humanity to take Earth organisms to another planet, especially one that may have had its own biosphere in the past — and may even have one today?

But researchers and mission planners have been debating such planetary-protection issues for years. And the conversation is only going to get more heated as the quest to put astronauts, and their trillions of hitchhiking microbes, on the Martian surface edges from sci-fi dream to reality.

The aerogel idea should be less controversial than a planet-wide terraforming effort, Wordsworth said.

"I think the advantage of taking the local and scalable approach, as opposed to globally modifying the atmosphere, is that you can study the region where you plan to try this carefully beforehand," he told Space.com. "And it's reversible."