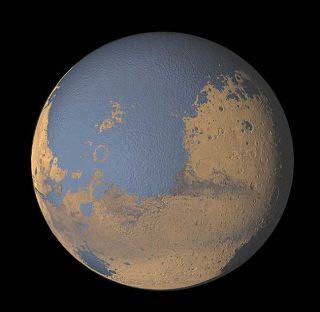 Mars may have once been covered with liquid water oceans, just like Earth.
(Image: © NASA)

We will eventually have the technology to make Mars a more habitable planet — but for whom? Earthlings, or Martians?

By definition, Mars terraforming would make it more Earth-like. Alternatively, "Mars renovation" would seek to resuscitate any native life that might have survived in environmental niches for billions of years. Astrobiologist Chris McKay, of NASA’s Ames Research Center in Moffett Field, Calif., favors a non-geocentric term: "planetary ecosynthesis," for establishing a robust biosphere on a planet’s surface.

Mars is certainly a prize for colonization. The Red Planet has as much surface area as all of Earth’s continents combined, making it the focus of several grassroots space pioneering groups. [How Humanity Could Terraform Small Planets (Infographic)]

But this presents a conundrum. McKay asks if a biologically rich and diverse Mars is more valuable than largely preserving the beautiful, but seemingly dead, world we are exploring today.

Regardless of the tenants, the first task at hand is to change the Martian atmosphere to make the Red Planet a warmer and wetter world. Mars’ large flood features indicate there is a lot of water locked in the planet; there was likely even an ocean 4 billion years ago. The world first needs to be thawed out.

Super greenhouse gasses — such as chlorofluorocarbons — could be introduced. This would warm the Red Planet and release frozen carbon dioxide for further warming. This would eventually allow for rivers and streams to again flow under a denser atmosphere. The "Big Thaw" would take a few centuries by McKay’s estimates.

But he predicts that it would take another 100,000 years for genetically engineered photosynthetic lifeforms to raise atmospheric oxygen to Earth levels. The oxygen could build an ozone shield against deadly solar ultraviolet rays. This might be bolstered by seeding the atmosphere annually with 10 million tons of stinky carbonyl sulfide (a gas emitted by volcanism on Earth).

If non-biological technologies could be developed for converting Mars’ carbon dioxide into oxygen, the planet might have breathable air in 10,000 years. It’s time to buy Martian acreage now before prices skyrocket.

Arctic and alpine tundra ecosystems would first emerge. Next, the lower parts of the equatorial canyons on Mars would see a treeline form as plant-based photosynthesis takes over from the microorganisms.

PHOTOS: Alien Robots That Left Their Mark on Mars

Some of the humblest of creatures would come next: Insects and soil invertebrates such as earthworms, er, marsworms. Pollination by flying insects — with huge wingspans — would greatly increase the diversity of plants grown on Mars through colonization. But let’s not introduce flies or mosquitoes!

This strategy turns the table if in fact we find Martian microorganisms. Then our goal should be to do triage and restoration of the ecology on Mars that may have flourished 4 billion years ago. We could "play God" and jump-start Martian evolution. We’d then have a ringside seat to see Darwinian evolution play on along a completely different, but perhaps parallel, track to Earth’s evolution.

"Restoring that (Martian) life to global diversity would have to be the best possible option for Mars," McKay wrote. "However, if life on Mars is genetically related to life on Earth or if there is no life to revive on Mars, then, a Mars teeming with Earth life is the next best option."

This is a decision that humanity will ultimately face. It will open our first major extraterrestrial dilemma. As the most advanced form of life in the solar system, are we entitled to assert a biological Manifest Destiny over other worlds?

Do we reshape Mars in man’s image, or reboot a Martian Genesis II?