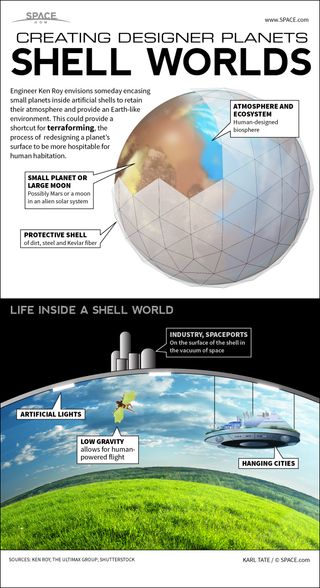 An engineer suggests building a roof over a small planet so that Earthlike conditions could be maintained.
(Image: © by Karl Tate, Infographics Artist)

Engineer Ken Roy envisions someday encasing small planets inside artificial shells to retain their atmosphere and provide an Earth-like environment. This could provide a shortcut for terraforming, the process of  redesigning a planet’s surface to be more hospitable for human habitation.

Full Story: Incredible Technology: How to Use 'Shells' to Terraform a Planet

Mars or perhaps a moon in another solar system could be encased in a shell of dirt, steel and Kevlar fiber. With air presssure raised to a safe level and enough oxygen in the atmosphere, people could live freely on the surface. A small planet would have low enough gravity to allow for human-powered flight. [Photos: Visions of Future Space Habitats & Artificial Ecosystems]

Lighting would be artificial since the shell could not admit sunlight. Heavy industry would be located on the outside of the shell, in the vacuum of space. Airlocks in the shell would allow spaceships to enter and land.