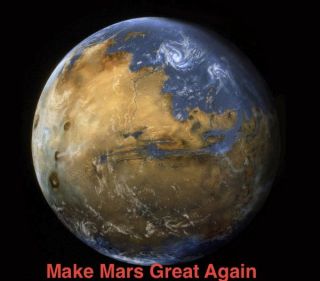 Mars as it would look with a big body of liquid water on its surface.
(Image: © Michael Carroll via Chris McKay)

A research team has devised a plan to make a portion of Mars more Earth-like by slamming an asteroid into it.

"Terraformation need not engineer an entire planetary surface. A city-region is adequate for inhabitation. MATT hits this mark," the Lake Matthew Team, the group behind the idea, wrote in a press release last month.

Key to the plan is a "Shepherd" satellite, which would steer an asteroid or other small celestial body into the Red Planet. That impactor would inject heat into the Martian bedrock, producing meltwater for a lake that would persist for thousands of years within the warmed impact zone, Lake Matthew Team members wrote.

"Whereas prior designs of habitation structures (habs) were limited to thousands of cubic meters, MATT habs can scale to millions of cubic meters — stadium scale, or greater," team members wrote in the press release. Furthermore, the impact site's treated lake water would be sufficient to cover and protect subaqueous domes, the team added.

"With scaling, the first Mars habs transition quickly into settlements, with capacity for self-sufficiency, even provisioning of expeditions worldwide," the press release said. "This cuts the Earth-shipped cargo mass, and the expense, of crewed missions."

"The MATT Shepherd's long mission ends with a small adjustment of the satellite's orbit, placing it into a Mars-resonant orbit that is a bit like an Aldrin cycler orbit," team members told Inside Outer Space. (An Aldrin cycler is a spacecraft, proposed by Apollo 11 astronaut Buzz Aldrin, that cruises repeatedly between Earth and Mars.) "This positions the Shepherd for retrieval by the colonists at a later date, notionally for museum display on Mars."

For more information on the group and its Mars Terraformer Transfer (MATT) idea, go to: http://www.lakematthew.com/.

Leonard David is the author of "Mars: Our Future on the Red Planet," published by National Geographic. The book is a companion to the National Geographic Channel series "Mars." A longtime writer for Space.com, David has been reporting on the space industry for more than five decades. Follow us @Spacedotcom, Facebook or Google+.  This version of this story was posted on Space.com.