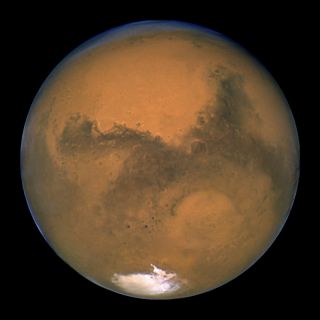 Since humans first began to wonder if there was life beyond Earth, one of the first places we hoped to find it was Mars. While our expectations have changed from the idea of cities and walking, talking Martians, to the thought that microbial organisms may lie deep beneath Mars' surface, this hope hasn't died.

As outrageous as it may sound to us now, a prominent 19th century astronomer named Percival Lowell was convinced not just that there was life on Mars, but that this life was intelligent and had built cities and a complex network of canals across the face of the planet. The theory went that Mars was once lush, but now was drying out, so the Martians had engineered the canals to route water down from the planet's polar ice caps to feed their civilization. Though Lowell popularized the idea, Italian astronomer Giovanni Schiaparelli was the first to propose Martian canals in the 1870s.

The first photos of Mars from orbit came from the NASA probe Mariner 4, which flew by the Red Planet in 1965. The probe's 21 photos of a dry, dusty surface disappointed those hoping for rivers, oceans or any signs of life.

It was more than a decade later that the first Mars landers were able to send back photos from the surface of the planet. NASA's Viking program sent two probes to orbit the Red Planet, which each ejected landers that touched down on its surface. The first man-made vehicle to come in contact with the surface of Mars was Viking 1, which landed July 20, 1976. It was followed on September 3 by Viking 2, which landed in a different spot.

A Martian meteorite discovered in Antarctica in 1984 called ALH84001 was found to have a mineral called magnetite that on Earth is associated with the presence of microorganisms. The meteorite is thought to have formed on Mars at least 16 million years ago, and landed on Earth roughly 13,000 years ago. Carbonate materials in the meteorite also indicate that liquid water was present when they formed. Finally, some have claimed that small structures inside the meteorite appear to be fossilized nanobacteria, though this idea has been controversial.

The first rover sent to Mars was NASA's Sojourner, part of the Mars Pathfinder mission, which also included a stationary lander called Pathfinder. The rover accomplished the most sophisticated studies of Martian geology and climate to date, though it found no direct evidence of water or life.

2004: Past Surface Water — Spirit and Opportunity

NASA's twin Mars Exploration Rovers Spirit and Opportunity landed on the Red Planet in January 2004. Within a few months, they'd found evidence that liquid water once existed on the Martian surface. Opportunity had found particular rock patterns inside a crater that indicated the presence of flowing water sometime in the past, and nearby chemicals suggested the site was once the shore of a salt-water sea.

The Mars Reconnaissance Orbiter arrived to circle the Red Planet in March 2006, taking high-resolution photos of many areas on the world's surface. The orbiter has found further evidence that Mars was once wetter than it is now, with observations of surface patterns that could only have been made by flowing liquid, most likely carbon dioxide or water, in its recent geological past.

On May 25, 2008 NASA landed the Phoenix spacecraft on Mars' arctic plains to study whether liquid water may have existed there, creating an environment habitable to life. After about a month of operations, NASA announced that Phoenix had found the first proof of current water ice under the surface of Mars.

In November 2011, NASA launched its most expensive, ambitious probe to Mars yet. The Mars Science Laboratory rover, called Curiosity, is due to land on Mars Aug. 5, 2012, to begin a two-year journey around the surface hunting for signs that Mars is, or ever was, habitable to life.