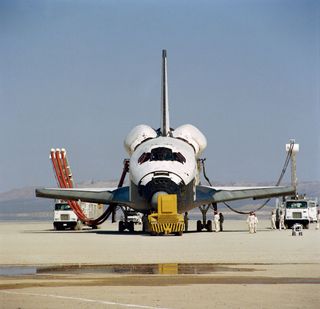 The first launch of the space shuttle Columbia in 1981 touched off an era of flight that allowed humans to ride in the same spacecraft to space more than once. The shuttle continued to fly into space for more than 20 years, orbiting Earth almost 5,000 times and spending more than 300 days outside of Earth's gravity. During its time in service, Columbia carried 160 astronauts away from Earth; the craft holds the record for the shortest and longest space shuttle missions (2 days, 6 hours, 13 minutes and 12 seconds; and 17 days, 15 hours, 53 minutes and 18 seconds, respectively).

Columbia was the second of NASA's space shuttles to suffer a fatal accident. On Feb. 1, 2003, while on its 28th mission, Columbia broke apart during re-entry, resulting in the death of the entire crew of seven astronauts.

Officially known as Orbiter Vehicle-102, Columbia was named after Massachusetts-based ship Columbia Rediviva that, in the 1700s, explored the dangerous inland waters around what are now Washington, Oregon and British Columbia. The ship was also the first American one to circumnavigate the globe.

Construction of the space shuttle began in 1975 and was completed in 1979. At 122 feet (37 meters) long, Columbia stretched a bit farther than three school buses. The spaceship measured 78 feet (24 m) from wingtip to wingtip, and stood 57 feet (17 m) high. A robotic arm allowed its crew to manipulate objects outside of the ship.

Columbia accelerated into space propelled by two boosters that fell into the Atlantic Ocean, where they were later recovered and reused for other flights. The external tank fell from Columbia after about 9 minutes, and burned up in Earth's atmosphere. The spacecraft was the first crewed American craft to fly without a prior uncrewed test flight, and was the first crewed mission to use solid fuel rockets.

Young and Crippen spent two days orbiting Earth. The goal of the mission, called Space Transportation System-1 (STS-1), was to put the new ship through its paces, verify its performance in space, and monitor potential problems. Future shuttle missions would carry satellites and laboratories, and help build the International Space Station. On Columbia's first mission, however, only the necessary instrumentation to monitor its performance was onboard. Post-flight inspection revealed that some of the heat-shield tiles were lost or damaged during the launch, but modifications repaired the problem and the shuttle suffered no permanent damage.

Unlike previous spacecraft, which deployed a parachute to slow the craft's fall into the ocean, the space shuttle was designed to glide back to Earth on its wings. On the morning of April 14, 1981, Columbia coasted onto a dry lakebed at Edwards Air Force Base in southern California as more than 200,000 spectators looked on.

Although Columbia was the first space shuttle to blast off, it was not the first shuttle. Enterprise, built in 1976, was the first space shuttle orbiter; it lacked engines and functional heat shields. Named for the spaceship on the iconic television show "Star Trek," the Enterprise was dropped from a modified Boeing 747 over the dry lakebed at Edwards Air Force base in California to prove that its design allowed it to safely glide back to Earth. Enterprise never traveled into space and is now on display at the Intrepid Sea, Air & Space Museum in New York City.

The space shuttle program was billed as a way to send humans to space at a lower cost than previous programs because the shuttle and its boosters could be reused. However, this was dependent on the craft flying many times a year — a pace that was never realized due to cost and safety reasons.

Nonetheless, the space shuttle program pioneered and facilitated many operations that are still important in the current space program, such as retrieving and repairing satellites and telescopes, helping to build the International Space Station, performing robotics, and sending astronauts on spacewalks for vehicle repairs and maintenance.

Between the first historic space shuttle flight in 1981 to the final touchdown in 2011, the Columbia and its four sister ships carried more than 850 astronauts on 135 trips into space — an average of four trips a year. Within that time there were two, multi-year pauses when all space shuttles were grounded: After Columbia's fatal accident in 2003 and Challenger's tragic explosion 17 years prior. Challenger disintegrated during launch on Jan. 26, 1986, killing the seven astronauts on board. After each incident, NASA conducted an investigation to identify the cause and address problems to ensure the safety of future missions.

The last space shuttle launch was on July 8, 2011, when Atlantis took off with four astronauts onboard for a 12-day delivery mission to the International Space Station. NASA retired the space shuttle fleet to make room for new exploration programs. In a statement released by the White House after the final launch of Atlantis, President Obama said that the end of the space shuttle program "propels us into the next era our never-ending adventure to push the very frontiers of exploration and discovery in space."

This article was updated on May 7, 2018 by Space.com contributor Elizabeth Howell.