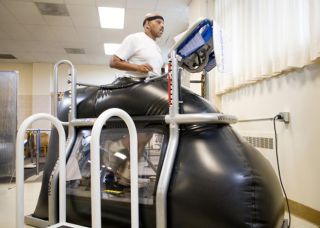 Retired Staff Sgt. Jesse Whitmier exercises in the NASA-developed "anti-gravity" treadmill that allows him to control the amount of his body used during the workout.
(Image: © U.S. Air Force)

The Palo Alto Veterans AffairsMedical Center in Palo Alto,Calif. is testing a prototype AlterG anti-gravitytreadmill in their outpatient physical therapy gym. Themachine employsdifferential air pressure technology to alter the body's weight, makingusersfeel as if they are "walking on the moon." [Photo:'Antigravity'treadmill at work]

"Most of my patients use it," saidLemmerBustamante, a physical therapist at the Palo Alto VA Medical Center."Ifwe didn't have the AlterG, it would be hard for my patients to usetreadmillsafter operations on their knees or hips."

Patients can zip themselves in to thetreadmill's pouch,which uses air to effectively "lift" the body, reducing the normalamount of pressure and weight at critical joints. The treadmill wasdesigned tohelp alleviate pressure on runners' hips and knees.

"The AlterG treadmill allows me to dothings I can'tnaturally do anymore," said Jesse Whitmier, a retired staff sergeantwhois recovering from a recent surgical procedure. "I can continue to runlike I did when I did track-and-field and even keepmy weight down without pain in my knees."

The machine's touch-screen interfacenot only allows thetherapist or patient to control the speed of the treadmill, but canalso beused to adjust the distribution of body weight to maintain a comfortableworkout.

The ability to control these settingsenables therapists tomodify the functions of the treadmill over time, in accordance to a patient'streatment plan. Bustamante reported seeing much fasterprogress in hispatients after using the anti-gravity treadmill.

"Previously, we used a pooltreadmill, but the problemis you can't control the weight bearing," Bustamante said.

The AlterG treadmill is the firstFDA-cleared medical deviceof its kind, and has been in use at the Palo Alto VA Medical Center forsevenmonths.

The prototype was developed by thePalo Alto RehabilitationResearch and Development Center in collaboration with NASA and AlterG,aprivately held medical device company based in Menlo Park, Calif.