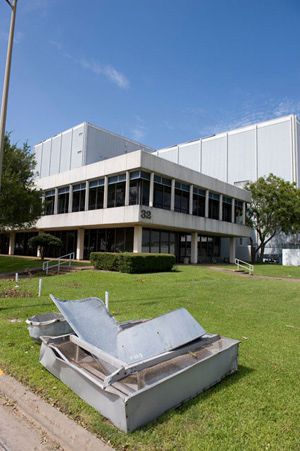 NASA's Johnson Space Center in Houston, Texas, reopened Set. 22 following an 11-day stand down due to Hurricane Ike. Here, roof damage is shown from one of the center's buildings.
(Image: © NASA.)

Home toNASA?s astronaut training facilities and Mission Control rooms for the spaceshuttle and International Space Station, the Texas-based JSC shut down on Sept.11 to allow personnel to evacuate in advanceof Hurricane Ike.

NASA closeddown the space station control room and activated backup teams near Austin,Texas, and Huntsville, Ala., to support the three-astronaut crew currentlyaboard the orbiting laboratory. High winds caused roof damage at several JSCbuildings, including the station Mission Control, and damaged hangar facilitiesat nearby Ellington Field, where NASA stories its T-38 astronaut training jets.The aircraft were evacuated from the base prior to Ike?s arrival.

Petty saidlocal schools around the center are still closed and leave is being granted toJSC personnel who need to remain home to oversee repairs to their damagedhomes.

The autonomousspace freighter, Progress 30, spent a few extra days orbiting Earth until NASAflight controllers at the backup control centers could position the station?sU.S.-built solar arrays in the proper position before docking.

NASAmission managers have said their hurricane recovery efforts were notexpected to hinder plans to launch the space shuttle Atlantis and a crew ofseven astronauts toward the Hubble Space Telescope on Oct. 10.

That launchtarget, however, maybe delayed a few days due to a series of minor technical glitches relatedto moving a cargo container holding new instruments and spare parts for Hubbleto Atlantis atop its seaside launch pad at the Kennedy Space Center in CapeCanaveral, Fla.

NASAmission managers will study the schedule impact, if any, of the glitches andset an official launch date for the Hubble flight during a two-day meeting tobegin Oct. 2.