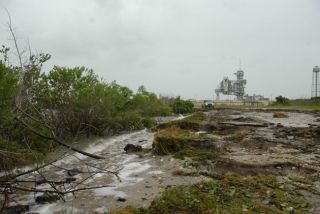 A debris-covered road with erosion near Launch Pad 39A at NASA's Kennedy Space Center in Florida after Tropical Storm Fay.
(Image: © NASA)

CAPE CANAVERAL, Fla. - NASArolled the orbiter Atlantis from its processing hangar into the Kennedy SpaceCenter Vehicle Assembly Building Friday, finally getting enough of a break fromthe remnants of Tropical Storm Fay to move the spaceship from one building toanother.

The quarter-mile move setthe stage for a huge milestone in just about seven days.

More than a foot of rainpoured down on parts of KSC - much less than the 23 inches recorded on thesouth end of neighboring Cape Canaveral Air Force Station.

A damage assessment andrecovery team found no major damage when it surveyed the space center after thestorm passed Thursday.

"There are some brokenwindows and there are some roof leaks," KSC spokesman Allard Beutel said."But nothing major was reported."

Atlantis and a crew ofseven astronauts are scheduled to blast off on Oct. 8 on amission to service the Hubble Space Telescope.

During an 11-daymission, the astronauts will outfit the observatory to operate through atleast 2013.

Atlantis will spend thenext week in the 52-story assembly building and engineers will make certain theorbiter, the tank, the boosters and a mobile launcher platform all aremechanically and electrically hooked up.

Atlantis likely will makethe 3.5-mile trip out to pad 39A next weekend.

The astronauts will fly toKSC soon thereafter for a practice countdown and then return to Johnson SpaceCenter in Houston for final flight training.