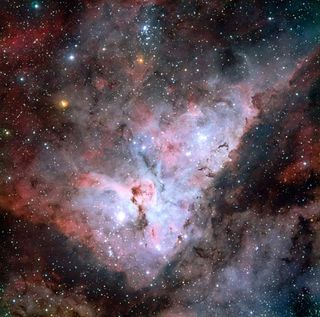 Several well known astronomical objects in and near the Carina Nebula can be seen in this wide field image: to the bottom left of the image is one of the most impressive binary stars in the Universe, Eta Carinae, with the famous Keyhole Nebula just adjacent to the star. The collection of very bright, young stars above and to the right of Eta Carinae is the open star cluster Trumpler 14. A second open star cluster, Collinder 228 is also seen in the image, just below Eta Carinae. North is up and East is to the left.
(Image: © ESO)

A new image from the European Southern Observatory (ESO) reveals amazing detail in the intricate structures of one of the largest and brightest nebulae in the sky, the Carina Nebula (NGC 3372).

The Carina Nebula is located about 7500 light-years away in the constellation of the same name (Carina; the Keel). Spanning about 100 light-years, it is four times larger than the famous Orion Nebula and far brighter. It is an intensive star-forming region with dark lanes of cool dust splitting up the glowing nebula gas that surrounds its many clusters of stars.

The glow of the Carina Nebula comes mainly from hot hydrogen basking in the strong radiation of monster baby stars. The interaction between the hydrogen and the ultraviolet light results in its characteristic red and purple color.

The new image of the nebula was produced by combining exposures through six different filters from the Wide Field Imager (WFI), attached to the 2.2 m ESO/MPG telescope at ESO's La Silla Observatory, in Chile.

The immense nebula contains over a dozen stars with at least 50 to 100 times the mass of our Sun. Such stars have a very short lifespan, a few million years at most, the blink of an eye compared with the Sun's expected lifetime of ten billion years.

One of the Universe's most impressive stars, Eta Carinae, is found in the nebula. It is one of the most massive stars in our Milky Way, over 100 times the mass of the Sun and about four million times brighter, making it the most luminous star known. Eta Carinae is highly unstable, and prone to violent outbursts, most notably the false supernova event in 1842.

For just a few years, Eta Carinae became the second brightest star in the night sky and produced almost as much visible light as a supernova explosion (the usual death throes of a massive star), but it survived.

Eta Carinae is also thought to have a hot companion that orbits around it in 5.54 years, in an elliptical orbit. Both stars have strong winds, which collide, leading to interesting phenomena.

In mid-January 2009, the companion was at its closest distance to Eta Carinae. This event, which may provide a unique insight into the wind structure of the massive stars, has been followed by a flotilla of instruments on several of ESO's telescopes.