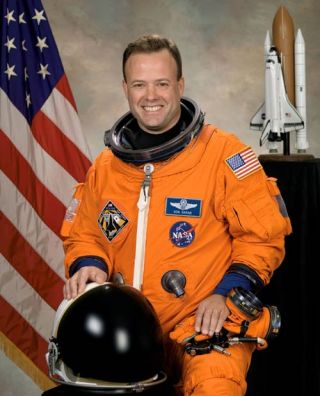 EXPERIENCE: Garan received his commission as aSecond Lieutenant in the United States Air Force from the Air Force Officer Training School at Lackland Air Force Base (AFB), TX, in 1984. Uponcompletion, he attended Undergraduate Pilot Training (UPT) at Vance AFB, OK andearned his wings in 1985. He then completed F-16 training at Luke AFB, AZ andreported to Hahn Air Base in former West Germany were he served as a combat ready F-16 pilot in the 496thTactical Fighter Squadron (TFS), from 1986-88.

In March1988, he was reassigned to the 17th TFS, Shaw AFB, SC, were he served as aninstructor pilot, evaluator pilot, and combat ready F-16 pilot. While stationedat Shaw he attended the USAF Fighter Weapons School, graduating in 1989, and then returned to the 17th TFS toassume the position of Squadron Weapons Officer.

From August1990 through March 1991, he deployed to SouthWest Asia in support of Operations Desert Shield/Desert Storm wherehe flew combat missions in the F-16. In 1991, Garan was reassigned to the USAFWeapons School where he served as a Weapons School Instructor Pilot, FlightCommander and Assistant Operations Officer. In 1994, he was reassigned to the39th Flight Test Squadron (FTS), Eglin AFB, FL were he served as adevelopmental test pilot and chief F-16 pilot.

Garanattended the US Naval Test Pilot School at the Patuxent River Naval AirStation, MD from January ? December 1997 after which he was reassigned to the39th FTS, Eglin AFB, FL where he served as the Director of the Joint Air toSurface Standoff Missile Combined Test Force. Garan was the Operations Officerof the 40th FTS when he was selected for the astronaut program. He has loggedover 4500 hours in more than 30 different aircraft.

NASAEXPERIENCE:Selected as a pilot by NASA in July 2000, Colonel Garan reported for trainingin August 2000. Following the completion of two years of training andevaluation, he was assigned technical duties in the Astronaut Office Stationand Shuttle Operations Branches. In April of 2006 he became an aquanaut throughhis participation in the joint NASA-NOAA, NEEMO 9 (NASA Extreme EnvironmentMission Operations), an exploration research mission held in Aquarius, theworld's only undersea research laboratory. During this eighteen-day mission,the 6 person crew of NEEMO 9 developed lunar surface exploration procedures andtelemedical technology applications in support of our Nation?s Vision for SpaceExploration.

He isassigned to the crew of STS-124. The STS-124 mission to the International SpaceStation will be the second of three flights that will launch components tocomplete the Japanese ?Kibo? laboratory. During STS-124 he is scheduled toserve as Mission Specialist 2 for ascent and entry, perform three spacewalks,operate the Space Shuttle robotic arm, and assist in the activation of the Kibolaboratory. Launch is targeted for May 2008.